Friday’s decision by UNESCO[1] to classify the Tomb of the Patriarchs as an “endangered Palestinian World Heritage site,” is simply obscene. It is a slap in the face to Israel and Nikki Haley is right… it’s an affront to history. Allen West is right as well… this isn’t just revisionist history, it is the elimination of history. This ruling proves that UNESCO is a joke and it also means that any minuscule chance of discussing peace between Israel and the Palestinians is now gone. That is an ancient Jewish holy site in Hebron and to say it belongs to the Palestinians is an outright lie. It’s an abomination.

US Jewish organizations strongly condemned the decision and had harsh words for UNESCO: “Today’s resolution on the Cave of the Patriarchs and Hebron disregarded the facts presented in a report by UNESCO’s own independent panel of experts and ignored their recommendation against adding them to the list of World Heritage Sites in Danger at this time,” Conference of Presidents of Major American Jewish Organizations Chairman Stephen M. Greenberg and Executive Vice Chairman and CEO Malcolm Hoenlein said in a joint statement. “By conducting the vote today in a secret ballot, the current chair of the committee and those member states who voted for the resolution clearly demonstrated they understood the shameful nature of their action.”

US Ambassador to the UN Nikki Haley condemned as an “affront to history” Friday’s decision by UNESCO to classify the Tomb of the Patriarchs — an ancient Jewish holy site in the West Bank city of Hebron — as an “endangered Palestinian World Heritage site.”

“The UNESCO vote on Hebron is tragic on several levels,” Haley stated, after UNESCO’s World Heritage Committee passed the resolution[4] by 12 votes to three, with six abstentions, during its annual meeting in the Polish city of Krakow. “It undermines the trust that is needed for the Israeli-Palestinian peace process to be successful. And it further discredits an already highly questionable UN agency.”

“Today’s vote does no one any good and causes much harm,” Haley declared.

In 2011, in compliance with statutory funding restrictions, the US stopped funding UNESCO after it admitted the “State of Palestine” as a member state. While America is still on the 58-member UNESCO Executive Board, it no longer has voting rights in the UNESCO General Conference.

This is a blatant attempt to erase Jewish history. The ramifications of this decision by UNESCO entails an effort to delegitimize any historical existence of a Jewish state, or nation prior to the 1948 declaration. They are also pushing the falsehood of the existence of a “Palestinian” people. This historical revisionism by UNESCO is an egregious insult to the Jewish people and to Israel. They are saying that the resting place of Abraham, Jacob (Israel), Isaac, Sarah, Rebecca, Eve and Leah has something to do with Arabs calling themselves “Palestinians” and it is absurd in the extreme.

Jonathan Greenblatt, CEO of the Anti-Defamation League (ADL), expressed regret that the UNESCO decision “not only undermines efforts to build Israeli-Palestinian trust,” but also “reinforces the perception among Israelis and Jews around the world that the Palestinians do not recognize the Jewish connection to Israel and are not serious partners to peace.” And that is exactly what Nikki Haley vociferously pointed out at the UN. She was ticked. 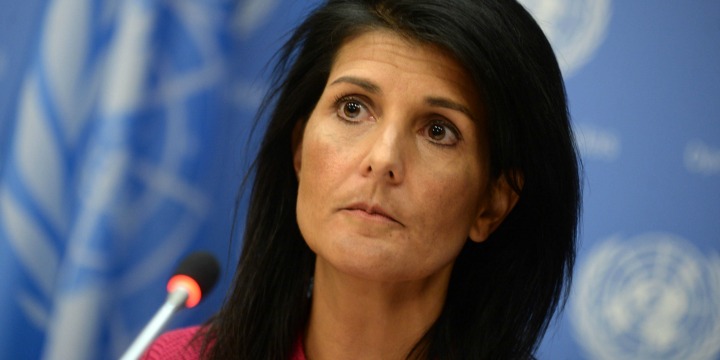