Nikki Haley Gifts Last Warning To N. Korea – ‘If You Give Us A Reason To Fight…’

Nikki Haley is warning North Korea[1] that we will use all options on the table if they force us to. She bluntly told the Hermit Kingdom, don’t “give us a reason” to fight. I hope she stands by that warning. Right now, I’m not seeing it. Rex Tillerson drew a red line over further missile launches and the NoKos have launched two since then. We are going to have to show them we mean business or they are going to hit the US with a crippling EMP attack while we dither.

Haley gave the warning while on the Today show. She’s a tough firebrand, but in the end, words are just words. The only thing a two-bit dictator like Kim Jong-Un understands is force. He needs to be removed for the sake of the safety of the world. Haley is talking sanctions again and it is an utter waste of time. North Korea has suffered under crushing sanctions for six decades. And no matter what the Chinese say they are going to do, they will still do business with the NoKos, either out in the open or through back channels. 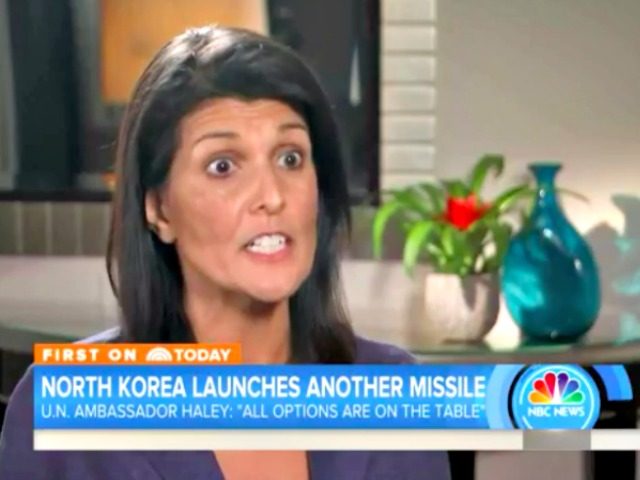 U.N. Ambassador Nikki Haley said Monday that “all options are on the table” when it comes to North Korea, and warned the dictatorship not to “give us a reason” to fight.

Haley made the remarks in an interview with NBC’s Today show as she toured Jordan and Turkey in her first international tour[3], in which is she is focusing on the humanitarian response to the Syrian refugee crisis.

Following recent missile tests [4]by North Korea, Haley was asked when it becomes time to try a new tactic with the rogue regime.

“We’re doing that now in terms of getting another [U.N.] resolution together, looking at sanctions and how we’re going to continue to force it because this is the same movie that keeps playing,” she said.

“All options are on the table,” she said. “That means we have made it very clear we don’t want to start a fight, so don’t give us a reason to have one.”

Haley has become known for her tough rhetoric against rogue regimes, warning the U.N. Security Council in April that the U.S. was prepared to act alone against Syria in the wake of a chemical weapons attack by President Bashar al-Assad. A few days later, President Trump ordered airstrikes against the Assad regime.

Nikki Haley is in a tough spot. She probably wants to do one thing, but can’t unless President Trump and the Pentagon back her. But eventually, they will have no choice and that day is coming very soon with North Korea. In the meantime, Haley is reassuring our allies that we can be trusted with sensitive intelligence. It’s bad enough that things are a tinderbox out there… Haley is doing clean up on aisle six when President Trump decides to divulge intel that is better kept to ourselves.

Haley says she also approves of the appointment of former FBI Director Robert Mueller as special prosecutor to oversee the investigation into alleged Russian interference in the presidential election, saying it was a way of clearing up the allegations and letting the administration get back to work. “I think we absolutely need the investigation,” she said. “I think that all these questions need to be answered so that the administration can get back to work.” True… there are far too many distractions at play here. North Korea knows this and is going to pick a fight when we are at our weakest.