Nikki Haley isn’t about to let the UN continue bullying our only true ally in the Middle East.

As this month’s president of the Security Council, Haley took the opportunity to critique the United Nations regarding their tendency to bash Israel and give the Middle East a pass. 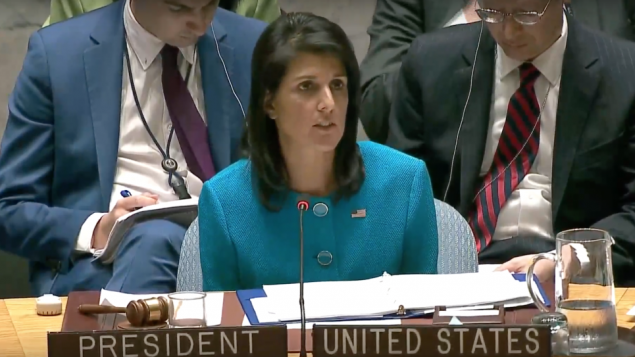 “Every month the Security Council convenes a meeting on the Middle East. We have lots of meetings on specific countries and conflicts in this region but this debate is our opportunity to talk about the Middle East as a whole. Regrettably, these monthly meetings routinely turn into Israel-bashing sessions. That’s the way the Security Council has operated for years. It’s a formula that is absurdly biased against one country. It’s a formula that is painfully narrow in its description of the conflicts in the region.”

She turned her focus to Iran, who is “meddling” in the affairs of Yemen and Syria as well as supporting terrorist group Hezbollah.

“Iran is using Hezbollah to expand its regional aspirations. That is a threat that should be dominating our discussions at the Security Council.”

This is not the first time that she’s used her time to chastise the UN for their unwillingness to address the human rights violations coming out of the Middle East. She has repeatedly spoken up in defense of Israel which I’m sure hasn’t made her the most popular person at the UN.

“Where there is terror, where there is death, there is Iran. Teheran is an accomplice in the atrocities taking place every single day in Syria. The Iranian proxy Hezbollah places its weapons in homes, mosques and hospitals in Lebanon, and in Gaza, Hamas has spent millions of Iranian dollars on rockets, guns and digging terror tunnels.”

I love that we finally have someone in the UN who isn’t afraid to tell them that they are full of crap and that they need to focus on things that actually matter.