Jake Tapper of CNN infamy[1] really thought he had Nikki Haley cornered on the whole ‘Trump should have gone to Congress before bombing Syria’ thing. Not so much. This is a woman who can hold her own and Tapper found that out in short order. She spoke the truth as well. Under the expanded War Powers Act, President Trump had the authority to do what he did in Syria. Going forward, I contend, he should go through Congress because we are getting very close to declaring war. But you’d be foolish to think that many in Congress didn’t know about the strikes before they occurred. I’m certain they did, which Haley pointed out.

And I’ve got news for everyone. A lot of the military movement you are seeing now, started back in January. Assets are being positioned all around North Korea right now and you can bet Congress is aware of what is transpiring there as well. I have seen more spine from Nikki Haley than I ever dreamed possible. She is absolutely fearless at the UN and will stand up against any of our enemies there. It’s impressive. After the strike last week on Syria, Bolivia demanded a meeting behind closed doors for the UN Security Council. Ambassador Haley delivered a brutal reply: “Any country that chooses to defend the atrocities of the Syrian regime will have to do so in full public view, for all the world to hear.” Hear, hear! 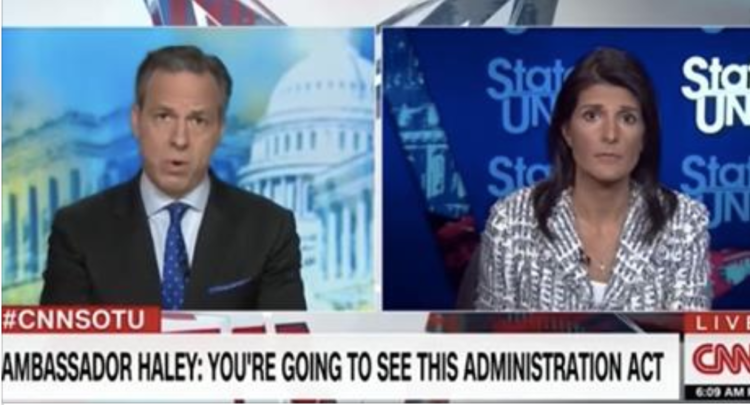 U.S. Ambassador to the United Nations Nikki Haley delivered a stern warning to the enemies of America on Sunday. Be afraid.

A smug Jake Tapper tried to trip up Haley when she appeared on CNN’s “State of the Union,” but Haley came prepared.

“As you know, President Trump used to believe that Congressional approval was needed for any kind of military strike in Syria. I know you’re a fan of his tweets. Here’s one of his tweets from 2013,” Tapper said before showing the tweet where then citizen Donald Trump said President Obama should get approval from Congress before attacking Syria.

Tapper, of course, conveniently ignored the fact that the tweet was sent years before he became president and was privy to intelligence briefings on the situation in Syria.

I expected better than this from Jake Tapper, but he has turned into yet one more biased media hack that won’t rest until he finds enough evidence to bring Trump down. It’s pathetic and despicable. Fortunately, the thugs of the media do not phase Haley. She comes wholly prepared and can hold her own with them.

Haley defends President Trump so forcefully on Syria simply because she feels he is right and just in this stance. I do as well. Syria isn’t fodder for a gotcha moment. It’s genocide and Russia helped them. And guess what? History is repeating itself… Muslim Chechnyans have opened up the first concentration camp[3] for homosexuals there in Russia. I sense the evil hand of Alexander Dugin[4] in all of this. I guess ‘never again’ is dead as we see this particular abomination raise its hoary head once more.