Just when we thought that President Trump had managed to get North Korea to back down on their threats of nuclear attack, the fat lump in the North decides to continue launching missiles. I guess his pride and the need to appear more powerful than he actually is takes precedent over his will to live.

Kim Jong-Un is announcing that he has successfully tested a hydrogen bomb that can be used in long-range attacks. That is a not so subtle threat to the United States, given that we are well aware that North Korea has yet to test a missile that can actually travel a considerable distance. 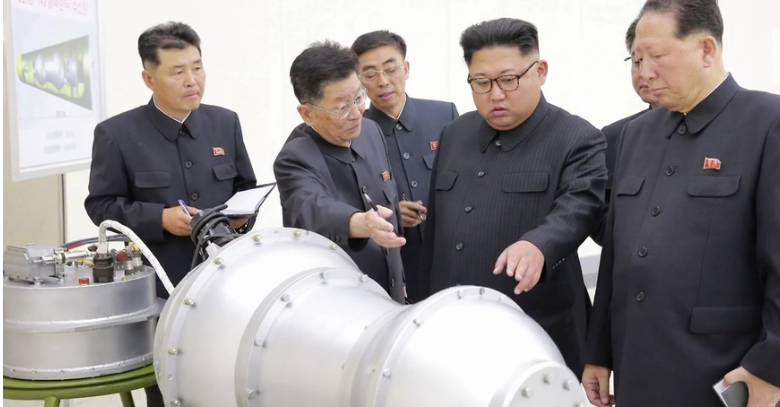 I’m not one to take anything that North Korea says at face value, because it’s likely nothing but fear-mongering propaganda. That being said, we have seen how quickly their nuclear capabilities have evolved, so it is not outside the realm of possibility that they have or are approaching the possession of a hydrogen bomb.

The last thing we want to do is underestimate a kook with launch codes, especially when the missiles they set off have hydrogen bombs attached.

Catharine Dill, nuclear weapons expert, has been talking to the BBC[2] about the matter and while she says it isn’t completely clear what exactly was tested, the results should concern anyone who might be in the line of fire.

“But based on the seismic signature, the yield of this test definitely is an order of magnitude higher than the yields of the previous tests,” she said adding, “[c]urrent information did not definitively indicate that a thermonuclear weapon had been tested “but it appears to be a likely possibility at this point.”

President Trump was absolutely right when he said that this isn’t the time for talking. Negotiations should have already happened if North Korea had any interest in peace. It is clear that they are bent on destruction and the only question remaining is “who will strike first?”