All Options On The Table With N. Korea – Threatening Behavior CANNOT Continue [VIDEO] 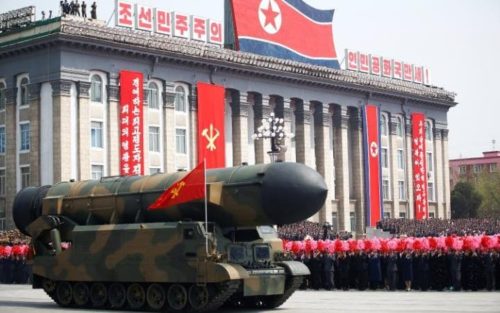 North Korea put on its annual display of military prowess[2] this past Saturday in celebration of what would have been the 105th birthday of its founder, Kim Il Sung. The tanks, the missiles, the troops, the red banners…all the predictable pomp and circumstance of a narcissistic dictator. North Korea’s cruel and self-absorbed dictator, Kim Jong Un, waved at troops as his parade of military hardware went by.

Meanwhile, nations who are under a potential threat from the petulant madman, are planning how they will respond to the huge potential problem that is North Korea.

National Security Adviser H.R. McMaster spoke with Martha Raddatz on ABC’s This Week and said in no uncertain terms that, “The president has made it clear that he’ll not accept the United States and its allies and partners in the region being under threat from this hostile regime with nuclear weapons.”

President Trump has been firm in his intention to do what is necessary to make sure North Korea cannot threaten or attack any other sovereign nation. He has enlisted the help of China as well, when he met with President Xi Jinping recently in Florida. But he has also said that even if no one else helps, we will handle the North Korea problem ourselves.

According to a British senior government source, “They are getting to the point where they think they may have to take out the ­facilities pre-emptively. Fallon (British Secretary of State for Defence) reviewed things with (General) Mattis a couple of weeks ago, what their different options were. They are much closer to taking military action than they were a year ago.”

The world has seen military parades like this North Korean spectacle before. Stalin, Hitler, Mussolini; the madmen of yesteryear, ensured their own demise and the toppling of their regimes when they threatened the entire civilized world with their evil. And if the world needs to respond once again to the lunatic ravings of a brutal dictator with his finger on the trigger, it will do so. With President Donald Trump leading the way.

When it comes to Kim Jong Un, it would behoove us all to remember what John Hawkins says in his new book “101 Things All Young Adults Should Know”. Number 10 is “People are what they are and probably are not going to change much once they reach adulthood.” The barbaric leader of North Korea is not going to change. He intends destruction for the West. And he will need to be stopped.

To find out what other wisdom John Hawkins has in his new book, look for it on Amazon. It’s for everyone, not just young adults!