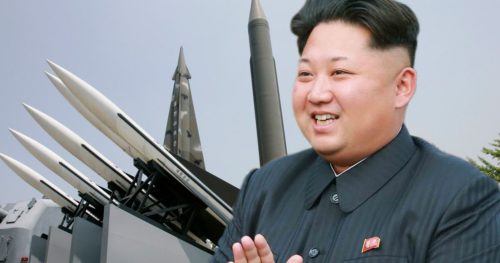 North Korea’s Dictator,[2] as all dictators do, has spent years trying to prove to the world how powerful and impressive he is. He does this by persecuting, killing and imprisoning his own people, as bullies always do, and by attempting to create missiles that can reach the United States. Because when you are a dictator and you have to prove your manhood, you go after the biggest, most powerful entity in the world. And that is the US. And this is what makes Kim Jong Un a very dangerous man. He wants nothing more than to attack or hurt the US, believing it will help to establish him as a legitimate world leader, a force to be reckoned with.

President Trump has no intention of allowing an unhinged narcissistic dictator with a giant chip on his shoulder, to hurt America or Americans. And he would like to count China as an ally in the effort to neutralize the threat of Kim Jong Un. But China hasn’t exactly been enthusiastic, prompting Trump to say, “Well if China is not going to solve North Korea, we will. That is all I am telling you.”

Deputy White House National Security Adviser KT McFarland has said, “There is a real possibility that North Korea will be able to hit the US with a nuclear-armed missile by the end of the first Trump term.”

This week President Trump hosts a state visit by the President of China, Xi Jinping, at his Florida resort. And the subject of conversation will likely turn to the petulant North Korean dictator. Trump has said, “China has great influence over North Korea. And China will either decide to help us with North Korea, or they won’t. If they do, that will be very good for China, and if they don’t, it won’t be good for anyone.”

Let’s hope the communists of China can agree to help stop the dictator of North Korea. But if they don’t. We’ll do it ourselves.