When pressed on the negative impact: Obamacare: is having on average folks, Democrats choose to focus on those who are being helped by the healthcare law.

But conservative pundit and authorAnn Coulter: highlighted just how devastating the impact can be in a recent appearance on “Fox & Friends.”

“This does have real world consequences: I got up the other morning and got an email from a friend saying, ‘My sister almost died because of Obamacare,’” Coulter told host Tucker Carlson. 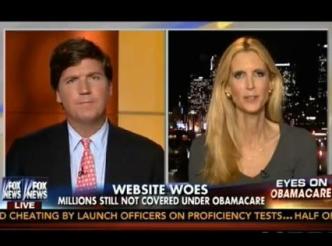 Coulter said the friend’s sister lost her coverage when Blue Shield pulled out of California because of Obamacare. Despite running a fever, the woman did not go to the emergency room because she had no insurance, until she went into septic shock.

As Coulter explained, her friend later called to say her sister passed away over the weekend.

“That is completely shocking,” Carlson said.

“But it isn’t,” Coulter replied. “It’s expected. We knew this would happen. It’s a horrible story, and people need to know about these stories. I emailed her and asked her if I could tweet this, and she said, ‘Julie would be very happy for you to tweet this.’”

The best-selling author took to Twitter to further draw attention to the negative impact of Obamacare, and supporters were quick to weigh in with their thoughts on the matter:

My friend's sister died today because of Obamacare. Was thrown off insurance, waiting to get O-care, > septic shock, died at hospital.

@AnnCoulter[4] Condolences but sadly, more to come of this.

@DCuteri[7] @AnnCoulter[4] Unfortunately, it sounds all too familiar! And its only going to get worse!

This post was used with the permission of BizPac Review[9].