At Least 8,000 Obamacare Enrollees Were Given THE WRONG COST ESTIMATES

Imagine spending hours of your life dealing with the horrible Obamacare website, finally signing up, and then finding out the cost you were quoted was wrong. It has happened to thousands of people in Washington state[1]. 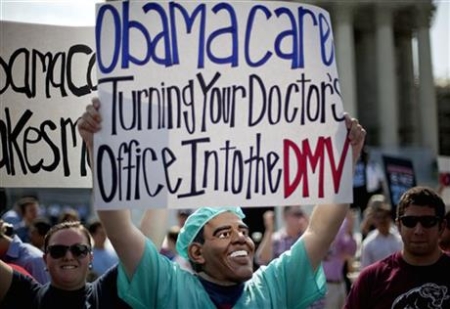 About 8,000 Washington residents will soon receive letters informing them that the price they are expecting to pay for health insurance purchased on the new online exchange marketplace is incorrect.

The letters are part of an effort by the Washington Health Benefit Exchange, which operates the exchange, to correct a major error that resulted in the miscalculation of tax credits that help qualified enrollees pay for insurance premiums.

…The miscalculation of the federal tax credit affected those who enrolled in an exchange health plan during the first few weeks after the exchange’s Oct. 1 launch.

For those few weeks, Healthplanfinder was submitting applicants’ monthly income to the federal hub, which compiles data from federal and state agencies to determine whether an applicant is eligible for Medicaid or for a premium subsidy to purchase a health plan through the exchange.

But the federal hub was expecting annual income, not monthly, which resulted in the miscalculation.

Approximately 8,000 Washington residents were affected, which meant they were told they qualified for a higher tax credit amount than they actually qualified for based on their income and household size.

How could such an error occur? “We’ve asked ourselves that many times,” Onizuka said. “We are still trying to figure out how this happened.”

…Some people will probably have to go through the selection process all over, said Chris Free, an insurance broker at Rapport Benefits Group in Tacoma, who has been advising clients on enrolling in the health plans available through the exchange.

“People may have selected plans that are no longer in their budget” once their tax credit is recalculated, Free said. For those clients, “we’ll need to sit down and help them re-evaluate their decision,” he said.

Welcome to the new normal under Barack Obama. Being forced to sign up on a terrible website for overpriced health care you don’t want, getting bad quotes for substandard care, all so you can have a privilege of inserting the IRS and government bureaucrats into your healthcare.