The Michigan woman who ignited a national firestorm by going public with her story about how Obamacare disrupted the cancer treatment she needs to stay alive is getting a personal look at how ugly the left can get in this country. 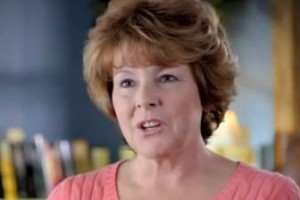 On Monday,: Americans for Prosperity: Regional Director Slade O’Brien used Twitter to post a picture of hate mail sent to: Julie Boonstra, a leukemia victim whose story put a personal face on the travesty of Obamacare. 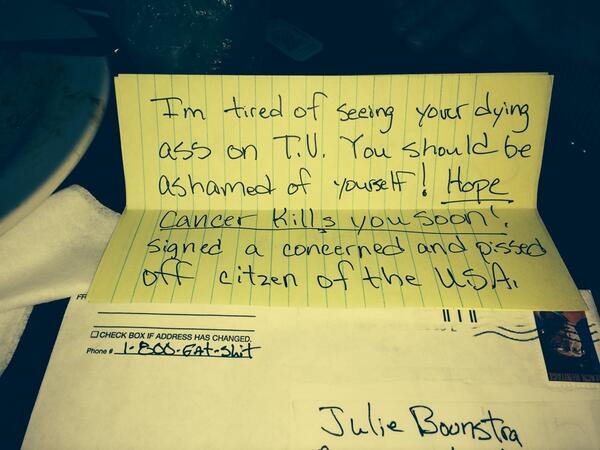 Since bullies are generally cowards, the letter was unsigned, of course, and had no return address. The only “identifying” information on the envelope was a vicious hoax phone number: 1-800-EAT-S***.”

This is a guy the libs must be proud to call their own — an anonymous coward who has the courage to send hate mail to a woman dying of cancer.

AFP did the country a service by publishing the attack, and Twitter users were quick to respond.

@SladeOBrien[3] @AFPhq[4] @AFPMichigan[5] @seanhannity[6] trying to keep it classy w/ the classless is a waste of time. Time for scorched earth policy

@SladeOBrien[3] @AFPhq[4] @AFPMichigan[5] @seanhannity[6] That message was written by one sick puppy whose idea of being a good person is twisted.

Naturally, at least one Twitter poster had a question about whether the letter was actually real.

@SladeOBrien[3] Both, libs + cons, have pulled hoaxes like this in the past. Julie probably didn't do it, but another conservative could have.

O’Brien had an answer. And it tells you something about the state of Dem politics today that he cites the former boxer and current thug from Nevada who’s passing as the Senate Majority Leader these days.

[email protected][14] sitting with her, the letter and the envelope it came in. You want to be like Sen Harry Reid and call me her liar? #fail[15]

And in any case, saying “another conservative could have” implies Boonstra’s a conservative.

A leukemia victim doesn’t have to be a conservative to point out that Obamacare’s screwed up her medical treatments.

She just wants to stay alive. Is that too hard for libs to understand?

This post was used with the permission of Bizpac Review[17].