Defunding Planned Parenthood Would Lead To More Births Or Something 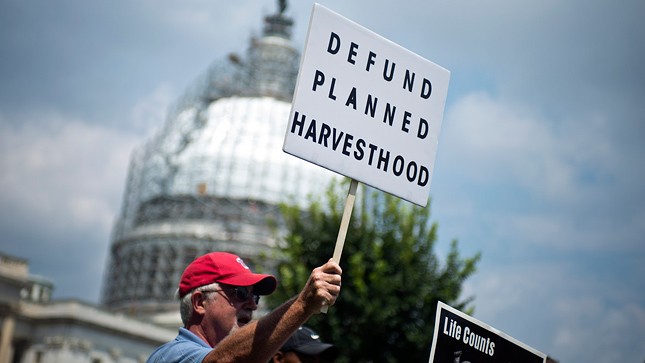 Apparently, the primary things Planned Parenthood does is provide abortions and contraception to people who refuse to pay for their own in order to have irresponsible sex

A congressional plan to make Planned Parenthood ineligible for federal funding would leave many women without services to help them avoid pregnancy, resulting in thousands of additional births, according to a new federal budget analysis.

The prediction came Monday as part of a much-awaited analysis[2] from the nonpartisan Congressional Budget Office, which assesses the fiscal impact of major legislative bills. It was part of a more sweeping look at a congressional health care bill that would repeal and replace the law known as Obamacare.

The analysts estimated that excluding the women’s health organization from the Medicaid program for one year, as congressional Republicans have proposed, would particularly affect low-income areas and communities without many health care options, leaving 15 percent of those people “without services that help women avert pregnancy.”

If only there was somewhere else someone could purchase contraceptives other than Planned Parenthood. Perhaps the bill should change the law so that places like pharmacies would be allowed to provide contraception. Maybe the new legislation would allow condoms to be sold in bathrooms and handed out in schools. Too early for that amount of sarcasm?

As for the plan overall

(Washington Post[3]) House Republicans’ proposal to rewrite federal health-care law would more than reverse the gains the Affordable Care Act has made in the number of Americans with health insurance, while curbing the federal deficit, according to a widely anticipated forecast by congressional analysts.

The analysis, released late Monday afternoon by the Congressional Budget Office[4], predicts that 24 million fewer people would have coverage a decade from now than if the Affordable Care Act remains intact, nearly doubling the share of Americans who are uninsured from 10 percent to 19 percent. The office projects the number of uninsured people would jump 14 million after the first year.

But the GOP legislation, which has been speeding through House committees since it was introduced a week ago, would lower the deficit by $337 billion during that time, primarily by lessening spending on Medicaid and government aid for people buying health plans on their own.

The report predicted that premiums would be 15 percent to 20 percent higher in the first year compared with those under the Affordable Care Act but 10 percent lower on average after 2026. By and large, older Americans would pay “substantially” more and younger Americans less.

The problem with this repeal and “replace” bill is that it doesn’t include any of the follow up measures people like President Trump and Rep. Paul Ryan have promised. It was crafted in a manner that would allow it to be passed through budget reconciliation. Apparently, for some reason, it is impossible to repeal Obamacare in the same manner it was passed, through reconciliation. And a full repeal is what we were promised. It’s what the GOP ran on since 2010.

Any follow up bill would (hopefully) create a pathway where it was easier and less expensive to purchase health insurance. But, that can’t be scored, because those bills have not been released.

Personally, I’m not real sad that this bill is looking bad. Go back to the drawing board, find a way to do full repeal, and have a replacement plan that works. There are plenty floating around.