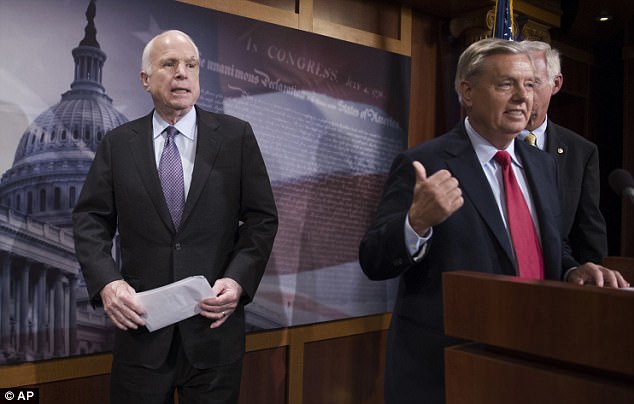 While Republicans are furious at McCain for voting no on the healthcare bill that would’ve started the process of getting rid of Obamacare, celebrities are now McCain’s biggest fans.

Yep, the lefties who thought he and Palin were the devil 9 years ago are now taking to social media to praise him.

SO MUCH 4 trumps Dis of Hero John McCain
″ I LIKE PEOPLE WHO WERENT CAPTURED“
Senator McCain Risked His Life in Vietnam
????Trump Hid In NY

This is English, right?

Trump was angry with the Republicans. Getting rid of Obamacare was one of his goals for his first 100 days in office and he’s had nothing but trouble from the Republicans, who had years to think up an idea to replace Obamacare, but did nothing but lobby and attend parties and continue to lose.

3 Republicans and 48 Democrats let the American people down. As I said from the beginning, let ObamaCare implode, then deal. Watch!

As reported in The Daily Mail:

With the vote stalled going late into the morning, McCain walked onto the Senate floor just before 2am to point his finger downwards and said ‘nay’ to audible gasps from fellow lawmakers[5].

A few days ago, Trump said of McCain:

“He’s not a war hero,” said Trump. “He was a war hero because he was captured. I like people who weren’t captured.[6]”

The remarks, which came after days of back-and-forth between McCain and Trump, were met with scattered boos.

McCain, a former Navy pilot, spent roughly five-and-half years in a notorious North Vietnamese prison known as the “Hanoi Hilton,” where he was repeatedly tortured. He spent two of those years in solitary confinement.

Singer John Legend also praised McCain, saying “Thanks to the Senators who voted to kill that stupid, heartless bill. Let’s stay vigilant. It’s not over.”

Bernie Sanders, who was pipped to the Democrat’s candidate post last year by Hilary Clinton, also expressed his gratitude to those in power who decided to back Obamacare.

He said: ‘Thank you to everyone across the country who stood up and fought back. Tonight was a victory for the American people.

‘This is only the first step.

‘We must now move forward to guarantee health care to all people as a right not a privilege.’

Billy Crystal, Jason Alexander and Kristen Bell were all among those in McCain’s camp, but there are plenty opposing the Arizona senator.

Great respect to @JohnMccain[7] who put country over party.

It looks like Washington is still being controlled by The Swamp. Trump has more work to do to pressure these old losers out.