It couldn’t happen to a more deserving group of people.[1] 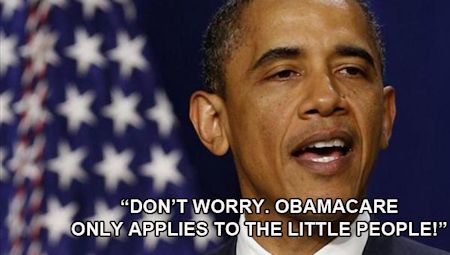 The economic shock has led Democratic chiefs of staff to call for changing the rules so that their staffers won’t take the economic hit.

The chiefs of staff have expressed support for a change that would allow congressional offices to re-classify their workers as non-official staff so that they can avoid the higher costs.
“Simply unaffordable,” Minh Ta, chief of staff to Rep. Gwen Moore (D-Wis.), wrote in an email to fellow Democratic chiefs of staff on Thursday afternoon.

Ta’s email, sent to other House Democratic chiefs of staff, said staffers above the age of 59 felt a “shock to the system” upon seeing plan prices on the District of Columbia’s new insurance marketplace.

…Ta wrote that House administrators are refusing to allow him to change workers’ designation until next year.

“I am asking for a solution now though because I will lose staff in my office because of this snafu,” Ta wrote in his email.

“I mentioned to payroll and House [administration] that it was unfair for our offices to make this designation without allowing our staff the ability [to] actually go on the [marketplace] to compare rates.”

Asked about the e-mail, Ta said that the office is “not trying to blame anybody,” especially the White House.

The frustration, he explained, is that his office and others are dissatisfied that lawmakers and staff are being treated differently than other federal employees.

Other offices on Capitol Hill said they’re fearful of workers leaving due to the changes in health insurance. Members of both parties have repeatedly warned that top talent could lose if healthcare benefits are significantly eroded.

“Obviously staff turnover’s a concern,” one Democratic aide said. “We’re losing one staffer, for reasons you could say are related to this.”

One staffer familiar with the controversy said it’s possible that lawmakers could reclassify their workers through creative means, like firing and then rehiring them.

Don’t you love how these arrogant staff pukes in D.C. helped foist this monstrosity on the country and now they’re looking for ways to get out of having to pay for it just like everyone else? What a disgrace!