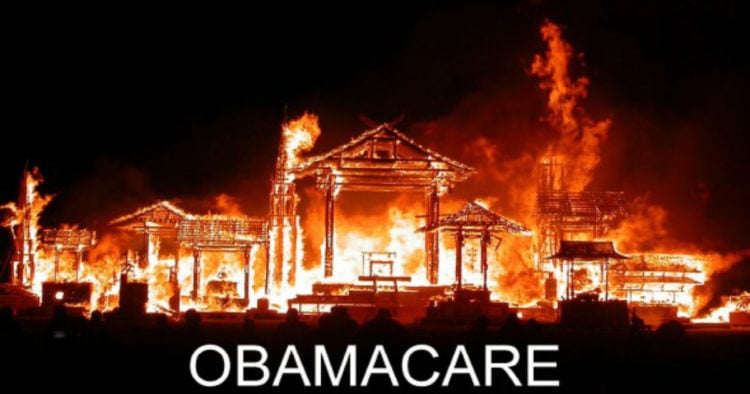 For the most part, Democrats have avoided campaigning on Obamacare since it was passed. Most did not even want to discuss it. It was a loser topic, which has seen Democrats go from a wildly majority party before the 2010 midterms to massive losses at the federal, state, and local levels. They own this lock, stock, and barrel. So, what do they want to do now?

(Washington Times[2]) After six years of resisting legislative changes to Obamacare, President Obama and Democrats now say they’re ready to work on fixes to the massive health law — so long as they expand the federal government’s role in health care.

With Republicans about to control all the levers of political power and moving to repeal the Affordable Care Act, Democrats are searching for ways to defend the law.

For many of them, that means admitting to flaws in the six-year-old law, and saying they can work with the GOP on fixes — as long as they don’t undermine the central achievements of Obamacare.

Mr. Obama said that means boosting the amount of money the government doles out to help people buy health insurance, and offering government-run plans to compete with the private sector.

“I’d sign on to a Republican plan that said we’re going to give more subsidies to people to make it even cheaper, and we’re going to have a public option where there isn’t an option,” the president said Friday in an interview with the Vox media outlet. “Here’s the problem: I don’t think that’s the thing that they want to do.”

In other words, they want to double down on Obamacare. The same thing that has seen their party’s fortunes decline precipitously.

Obama did get one thing correct: there should be no repeal without a plan to replace. I know some have said “just toast it and we’ll go back to the way it was.” It’s too late for that. That time was the 2012 elections. Now, there needs to be a plan to make sure people can obtain health insurance if they want it. Of course, lots of healthy people do not want it (their mistake, IMO). And the GOP is going to have to deal with those who received insurance via the Medicaid expansion, which accounted for a majority chunk of the new enrollees.

As far as Obama seeing it? He broke it, he doesn’t get to be involved now. He’s also on his way out the door. Soon to be inaugurated President Trump can, via executive order, trash so many components which were created by HHS. The contraception mandate, the work hours requirement, the number of people in companies requirement, and so forth, can all be sent to the ash heap with the wave of a pen.

The best thing the GOP can do is implement a few rules while relaxing the Federal government’s control of health insurance and healthcare. Why do we need them to be involved in our decisions? Get out of the way and mind your own business.