Wow. If this doesn’t make your blood boil[1], I don’t know what will. Three former Obama speechwriters casually sat around for an interview and laughed over the well-crafted lie, “If you like your healthcare, you can keep your healthcare.” They were so proud of the speeches they wrote for Obama that snookered an entire nation. The ends justifies the means evidently. Charlie Rose yucked it up as well. David Litt, Jon Lovett and Jon Favreau will become infamous along with Obama for shoving unbridled socialism down America’s throat using glossy words wrapped around abhorrent lies. 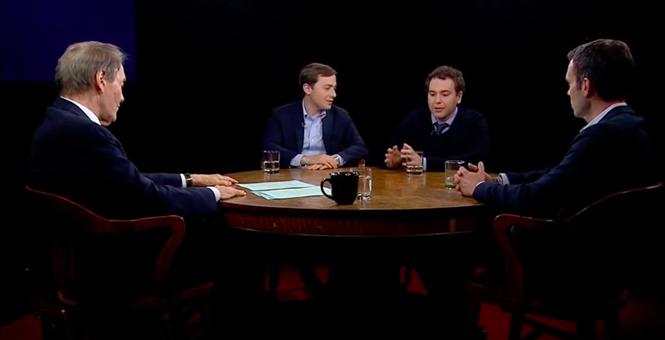 It was a sight to behold — the stunning confessions of a trio of cynical ex-speechwriters for Barack Obama — three young men freely admitting with casual laughter that they were more interested in crafting attractive lies for the president to utter than in promoting truth.

After Ben Rhodes’ recent acknowledgement [3]that the Obama administration’s rhetoric regarding the Iran nuclear deal contained intentional dishonesty, it might have served as a signal to former Obama staffers to steer clear of openly celebrating the president’s other lies. Nevertheless, when a trio of one-time Obama speechwriters joined PBS host Charlie Rose recently, they shared[4] a hearty laugh over one of the most notorious presidential whoppers of the past eight years.

While the three guests — David Litt, Jon Lovett and Jon Favreau — recalled[5] fondly the lighter moments of writing the words the president would deliver off his teleprompter, Lovett said the work he did on more consequential matters made a bigger impact.

“Lovett wrote the line about, ‘If you like your insurance, you can keep it,” he said in reference to Obama’s propagandic line used to sell Obamacare to a skeptical public — a promise that has since been proven blatantly bogus. “How dare you!” Lovett replied, joining the others in a laugh. “And you know what? It’s still true! No.” This takes arrogance to a whole new level. The utter contempt for Americans is on full display here. Millions of Americans lost good health coverage over this and the costs imposed on all of us are astronomical and crippling. TownHall’s Matt Vespa wrote, “Last time I checked, laughing at millions of people who got their insurance gutted because you put to paper a bold-faced lie is sort of messed up.” Jim Treacher wrote at The Daily Caller that the exchange resembled the type of bonding that often happens when friends mock each other over a failure. “Except instead of muffing a golf shot or something,” he concluded, “Lovett helped ruin the American healthcare system by lying to all of us.” This isn’t funny, it’s tragic and criminal. And that the Republicans and Donald Trump are all for keeping it in place and going to single payer healthcare is obscene.