GOP Rep RIPS Dems For Selling Lies Against His Party On Healthcare Bill – LEVELS Them! [WATCH] 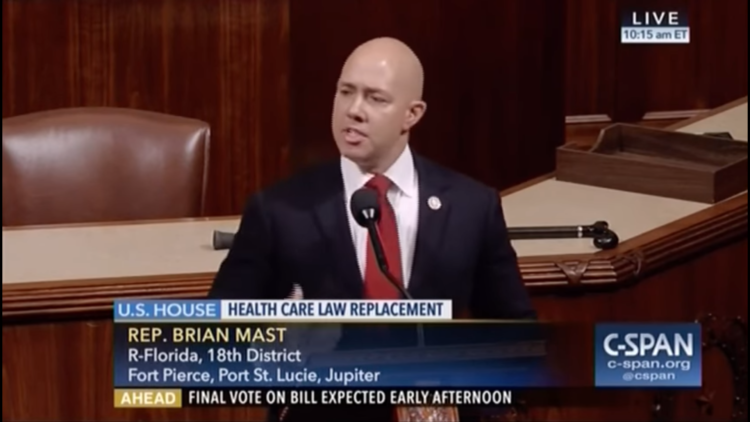 When Rep. Brian Mast (R-FL) roasts Democrats on the floor of the House of Representatives for their lives over the new healthcare bill, we all need to listen. In this case, Mast defended the bill from complaints that the new legislation will make it impossible for anyone with pre-existing conditions to get insurance under the ACA.

Rep. Brian Mast enlisted in the U.S. Army in 2000 and eventually became an explosive ordnance disposal technician. During his time in Iraq during Operation Enduring Freedom, he was injured by an IED in Kandahar and lost both of his legs as well as one of his fingers.

So this is one man that can absolutely talk about pre-existing conditions and the importance of medical care.

As reported by the Free Beacon, his short speech packed in some major punches about both the new bill and the ObamaCare system:

Mast added that the current situation under the Affordable Care Act does not protect Americans with pre-existing conditions because the number of health insurance companies participating in the Obamacare exchanges has dramatically decreased. There are some areas of the country where there is one or zero health insurance providers.

That is, Obamacare was not a one-size-fits-all solution to people with pre-existing conditions and the new bill will in fact improve the situation for Americans like himself.

He went on to further rip the Democrats:

“This is the question every American should be asking themselves: who is it that’s going out there and saying that pre-existing conditions won’t be covered?” Mast said. “It is the exact same group of people that went out there and lied to the face of every single American, telling them if they like their plan they would keep their plan, if they like their doctor they could keep their doctor, that the average American family would save $2,500 or more on health insurance.”

“That was a bold-faced lie, and it was orchestrated by architects who went out with the intention to prey on the American people,” Mast continued. “That is who’s going out there selling these lies against my party.”

Rep. Paul Ryan has also come out to assure patients with pre-existing conditions[2] that they will not be left out in the cold.

In John Hawkins’ new book, ‘101 Things All Young Adults Should Know’, he teaches in number 85 of the book that you are not a victim. I’m sure Rep. Mast doesn’t view himself in that way, and that’s what makes him so strong.