HONOLULU: –: Hawaii Health Connector: isn’t financially sustainable and, because of that, should be a state agency, officials say. 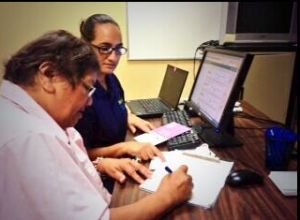 [1] The nonprofit state exchange received $204 million in federal money. Once that runs out, the exchange will be expected to fund its $10 million to $14 million in annual operations through fees on local insurance companies. The fees, now at 2 percent, are generated through a percentage of sales made through the exchange.

But numbers: as of Dec. 7: released : by the Hawaii Health Connector show just 683 people in Hawaii bought plans through the exchange, or less than 1 percent of Hawaii’s 1.4 million people.

Another 6,615 accounts were established, 220 of which were small businesses, but they have not completed the paperwork to buy insurance, exchange officials said.

Sanjeev Bhagowalia,: the state’s IT director,: and: Pat: McManahan, the state’s human services director, as well as representatives from: Kaiser: and: HMSA: health insurance, told state representatives at a Dec. 12 hearing they should consider allowing the state to take over the private nonprofit, which the Legislature set up to implement the Affordable Care Act here.

Bhagowalia said 3,000 to 4,000 people signing up through the exchange – out of a potential 1.4 million – is “not a good outlook for us,” and “the business model will not survive.”

McManahan encouraged lawmakers to act quickly because the federal money will evaporate by 2015.

“The time is now to make the decision. The longer it is postponed, the less opportunity,” McManahan said.

GOVERNOR: Neil Abercrombie, governor of Hawaii, enthusiastically supported the Obamacare exchange, but his expectations of 100,000 or more people signing up fell flat

Gov. Neil Abercrombie: and the Hawaii Health Connector’s board and administration assumed at least 100,000 people – all of the state’s uninsured – would sign up for health insurance over the next two years. Initial financial plans for the connector were based on 300,000 people – or 24 percent of the state’s population – buying health insurance. That hasn’t happened, even though the connector: extended the first enrollment period from Dec. 15 to Dec. 23.

Tom Matsuda, interim director of the Hawaii Health Connector, said the nonprofit has just more than $100 million to maintain its operations through 2014. So far, about half of the $200 million was either spent or appropriated.

An estimated $53 million was spent on: HawaiiHealthConnector.com[3], which, Bhagowalia said, still has a number of glitches.

Bhagowalia also worried the website is not secure enough to keep “very sophisticated foes” –: hackers[4]: – from obtaining confidential information from the site.

“This is a very serious area and we are not prepared,” Bhagowalia said.

Matsuda, who took over as the connector’s executive director Dec. 9, said his focus will be to increase enrollment, fix any other glitches in and “stabilize, harmonize and organize the operation.”

Rep. Bert Kobayashi: said he was stunned to learn the connector has spent $10,000 per person registered on the site.

“That does not sound like it is even possible,” said Kobayashi, a Democrat who represents Kalaha and Kaimuki on Oahu.

A Watchdog.org analysis shows the exchange has actually spent $292,825 on each person who successfully signed up for insurance.

Other representatives were disappointed to hear state: Insurance Commissioner Gordon Ito: admit the exchange would not lower health insurance rates in Hawaii.: Rep.Justin Woodson, a Democrat from Maui, pressed Ito on the issue.

Ito said insurance plans obtained through the exchange would probably increase 8 percent to 10 percent per year, in part because of the fees assessed on insurance companies to fund the exchange.

The intent of the Affordable Care Act is to get uninsured people into the marketplace and to spread cost and risk, Ito said, noting Congress failed to address cost drivers with: Obamacare.

The exchange is flooding the airwaves with ads on TV and radio encouraging people to sign up.: So far, $1.2 million has been allocated for a public relations, media and public outreach contract.

This post was used with the permission of Watchdog Wire[5].