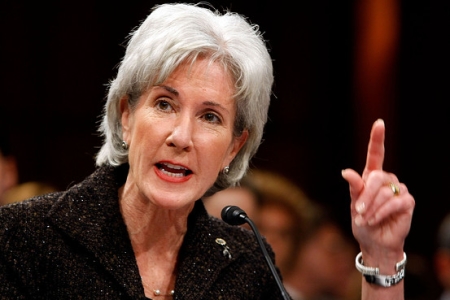 Health and Human Services Secretary Kathleen Sebelius rebuffed an appeal from Rep. Lou Barletta on behalf of a girl who needs a lung transplant but can’t get one because of a federal regulation that prevents her from qualifying for a transplant.

“Please, suspend the rules until we look at this policy,” Barletta, a Pennsylvania Republican, asked Sebelius during a House hearing Tuesday on behalf of Sarah Murnaghan, a 10-year-old girl who needs a lung transplant. She can’t qualify for an adult lung transplant until the age of 12, according to federal regulations, but Sebelius has the authority to waive that rule on her behalf. The pediatric lungs for which she currently qualifies aren’t available.

“I would suggest, sir, that, again, this is an incredibly agonizing situation where someone lives and someone dies,” Sebelius replied. “The medical evidence and the transplant doctors who are making the rule – and have had the rule in place since 2005 making a delineation between pediatric and adult lungs, because lungs are different that other organs – that it’s based on the survivability [chances].”

Barletta countered that medical professionals think Murneghan could survive an adult lung transplant. During the exchange, he also said that the girl has three to five weeks to live.

Doctors think Sarah Murnaghan could survive a lung transplant, but Kathleen Sebelius has decided that it’s better that she die rather than cut a little red tape. Gee, that almost sounds like a death panel of one, doesn’t it?

Of course, this whole situation wouldn’t be occurring if we had a sane transplant policy in this country in the first place. We could make one simple change: Organ donation would be “opt out” instead of “opt in.” Then, even if we made it incredibly easy to opt out and publicized it relentlessly, we’d have so many people donating organs that we wouldn’t have any shortages at all. Nobody’s rights would be lost, nobody would be hurt, we’d just be saving lives that are being unnecessarily lost.

Instead, we have Kathleen Sebelius acting like a Roman emperor and giving the thumbs down to the continued existence of a 10 year old girl. I guess if Sarah Murnaghan’s parents wanted her to live, they should have given more money to the Democrats because I can assure you that if the little girl in question were the child of a prominent union member, Solyndra executive, or Obama fund raiser, the rules would have been suspended a long time ago.