Mitch McConnell: The IRS Can’t Be Involved In Obamacare

How damaging is the IRS scandal to the Obama Administration? Well, the Republican’s timid Senate Minority Leader Mitch McConnell, who has spent the last five years being beaten like a rented mule by Harry Reid and Barack Obama, is effectively going on the offensive against the Obama Administration for the first time since, well, ever[1]…. 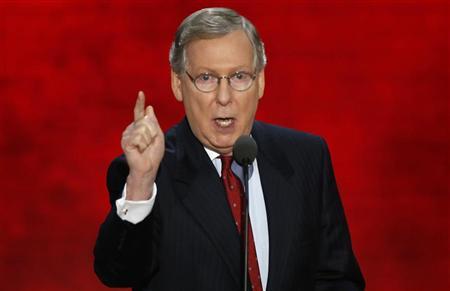 “I don’t think so,” the Kentucky Republican says in an exclusive interview. “I don’t think we ought to have Obamacare. We ought to pull it out root and branch, if we possibly can.

“And, certainly, the IRS part of administering Obamacare, particularly in the wake of this IRS scandal with regard to suppressing the views of Americans who were critical of the IRS, raises further suspicions about their involvement in the administration of Obamacare.”

…Earlier this week, the senator demanded the resignation of IRS Acting Director Steven Miller, who admitted that he had known about the singling out of conservative groups with such words as “tea party” and “patriot” in their names since last May.

McConnell tells Newsmax that the current IRS controversy is yet another effort by the Obama White House to suppress those who oppose its policies. He cites moves by HHS Secretary Kathleen Sebelius regarding Obamacare.

“During the debate, she sent out a directive to the health insurance companies telling them they couldn’t send a letter to their policyholders giving them their impression of the impact of Obamacare on premiums,” he says. “Now, the same secretary is shaking down those companies for contributions to a fund that will apparently pay for ads to be beamed at the American people trying to convince them that they should like Obamacare.”

…He also noted that the agency leaked confidential documents from conservative groups whose tax-exempt status had not yet been approved to the liberal news investigative website ProPublica after last year’s election.

“We know they were right in the middle of the campaign – and how many of them, how high up it goes, we’ll find out,” McConnell says. “This is completely unacceptable in our free society – and now we know they probably targeted Billy Graham’s organization.”

Where has this Mitch McConnell been for well, his entire adult lifetime? Maybe it just takes a potential primary and a big scandal to bring this side out of McConnell, but the Republican leadership should be this aggressive all the time. So, better late than never and let’s hope the Republicans keep this up.