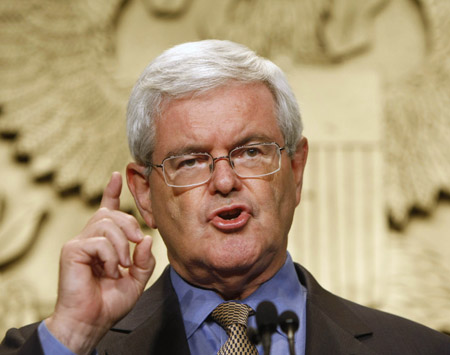 “I personally believe Obamacare is going to collapse. I doubt in three or four years anything resembling the current system is going to exist,” Gingrich told The Daily Caller in a wide-ranging interview. “Young people are going to look at this and ask themselves if they’re just going to pay the penalty, which is dramatically cheaper than buying insurance.”

“Sebelius should resign. It sends a bad message across government. Nothing like this could happen in the private sector without replacing the person in charge,” said the former House speaker and newly minted Crossfire host, whose 27th book, “Breakout: Pioneers of the Future, Prison Guards of the Past, and the Epic Battle That Will Decide America’s Fate,” focuses on how bureaucratic systems impede technological progress.

Obama made a lot of promises he never intended to keep and now the Democrats are facing the prospect of having to pay the price at the polls for a bill that doesn’t work and isn’t ever going to work. Suddenly, it’s starting to dawn on them that they’ve hitched their boots to an anchor and they’re about to drop into the deep blue sea. Would they support repeal today? No. But, you might be surprised at how the prospect of having to face millions of voters furious over healthcare can change a politician’s perspective on a law.