How many Americans are being smashed by these same sort of crushing financial blows because of Obamacare?[1] 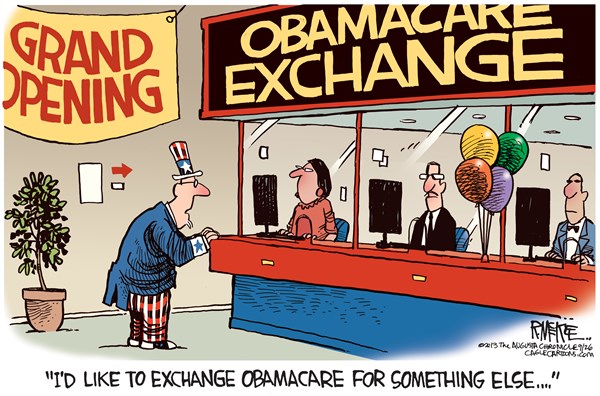 Across North Carolina, thousands of people have been shocked in recent weeks to find out their health insurance plans will be canceled at the end of the year — and premiums for comparable coverage could increase sharply.

One of them is George Schwab of Charlotte, who pays $228 a month for his family’s $10,000 deductible plan from Blue Cross and Blue Shield of North Carolina.

In a Sept. 23 letter, Blue Cross notified him that his current plan doesn’t meet benefit requirements outlined in the Affordable Care Act and suggested a comparable plan for $1,208 a month — $980 more than he now pays.

“I’m 62 and retired,” Schwab said. “This creates a tremendous financial burden for our family.

…Michael Hood, 46, who lives near Winston-Salem, is another of the Blue Cross customers who is suffering sticker shock after receiving a recent renewal letter.

Self-employed as part owner of a medical device distributorship, Hood said he and his wife “try to live a healthy lifestyle and keep our medical costs down.” They chose the high-deductible plan to keep their premium low.

Hood said his income is about $85,000 a year, which would mean he might be able to qualify for a subsidy. He said he checked the online marketplace, which has been operating only sporadically this week, and didn’t think it looked like his family would be eligible.

One of the pluses of any new plan is that it will cover maternity care, which his current plan doesn’t. But “is that really worth paying $1,000 a month more for?”

“I’m angry that legislation has been passed that is forcing me to purchase something that otherwise I would not have to purchase,” Hood said.

Liberals are completely indifferent to all the people they’re hurting with this thoughtless, poorly designed law. Millions of Americans are losing their jobs and millions more are being cut back to part-time or aren’t being hired at all because businesses are reacting to the law. Millions of other Americans are going to lose their health care entirely because they’re going to lose their current plans and won’t be able to afford the much more costly options mandated under Obamacare. Other Americans are going to have to choose between buying food and clothes for their children or paying the massive rate increases being caused by the law.

How can liberals do this much damage to so many Americans and just shrug it off in good conscience? Maybe the problem is that they just don’t have consciences.