Fortunately, the IRS will be the enforcement agency for Obamacare, wanting tons and tons of your personal and private information, and the person in charge[1] of the IRS department which targeted the TEA Party is running the IRS health care office, so, hey, what else could go wrong? 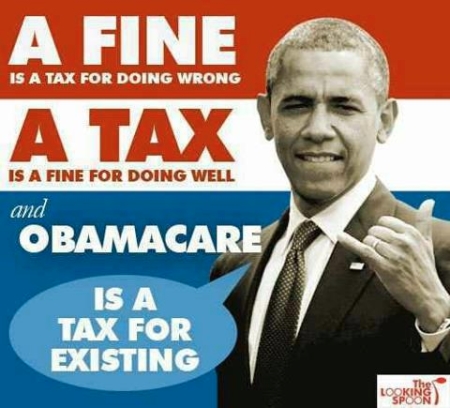 (Washington Examiner[3]) When President Obama was selling his health care legislation to Congress, he declared[4] that “the plan I’m proposing will cost around $900 billion over 10 years.” But with the law’s major provisions set to kick in next year, a new analysis by the Congressional Budget Office projects[5] that the law will cost double that, or $1.8 trillion.

What accounts for the dramatic difference? It’s true that at the time of passage, the CBO said[6] the gross cost of the law’s provisions to expand insurance coverage would be $940 billion over a decade. But as many critics of the health care law pointed out at the time, this number was deceptive because it estimated spending from 2010 through 2019 even though the program’s major spending provisions weren’t scheduled to go into effect until 2014. Effectively, the original estimate measured the cost of six years of Obamacare instead of 10.

And everyone knew that Team Obama was playing games with numbers as they submitted Obamacare to the CBO, and that this was based on static conditions that really didn’t account for the future conditions, nor what the fallout of implementation would be, such as people losing their employer based insurance

Now, as implementation approaches, CBO has released projections for the 2014 to 2023 budget window – the first actual decade of Obamacare – and the gross cost projection is $1.8 trillion.

CBO now expects the Medicaid expansion to cover an additional 13 million people by 2023 (up 1 million from its February estimate) and the new government-run insurance exchanges to cover 24 million (1 million fewer than previously projected).

So, for one thing, Ocare is losing 1 million who would have paid into the exchanges while adding 1 million non-paying patients into Medicaid.

Phillip Klein goes on to write that the CBO estimates that 7 million will lose their employer based health insurance. And these are all estimates. Once the reality of ObamaCare kicks in the price tag will surely go much, much higher.