It’s difficult to understand why anyone in America still thinks that allowing full implementation of Obamacare is a good idea.:  We’ve seen how the monstrosity of a bill – at over 2,000 pages – has spawned over 20,000 pages of new regulations on the health care industry.:  The very idea that any could survive for long under that kind of constant change is ridiculous.:  In just over a month, the controversial contraceptive mandate will kick in, forcing insurers to cover contraceptives for women – just one of many parts of Obamacare that no Congressman or Senator ever voted on, but instead was left to the discretion of the unelected Health and Human Services secretary Kathleen Sebelius.

And this, as is proven by the massive stack of regulations added after Obamacare’s passage, is possibly the biggest reason why Obamacare is bad for the American health care industry.:  Obamacare gives HHS an open hand to regulate insurers and health care providers in pretty much any way they see fit – adding regulations to Obamacare that, if contained in the original bill, would have prevented it from ever passing in the first place. 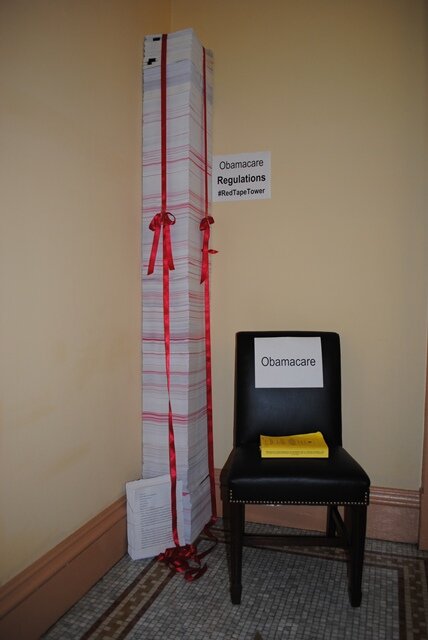 But even if you ignore the fact that Obamacare was little more than a government power grab pushed through with smoke and mirrors in a massive campaign designed entirely around fooling the American public into believing the bill would do things that it doesn’t do, Obamacare is still a massive failure.

The big push right now is to get the insurance exchanges into place so that uninsured Americans have somewhere to go for insurance once the mandate kicks in at the beginning of 2014 – less than 6 months from now.:  But according to the Government Accountability Office[2], state exchanges are behind schedule for implementation, the small business exchange is behind schedule, and it becomes more and more apparent by the day that this massive scheme will be nowhere near ready by the January 1 deadline.

And you can’t look at Obamacare implementation without considering the issue of IRS enforcement.:  We already know now that the Internal Revenue Service cannot be trusted to conduct business in a nonpartisan manner – the latest ongoing scandal involving the blocking of 501c4 applications is just one of many times the IRS has been used as a political weapon.:  The IRS is hiring thousands of new agents to assist in its role in Obamacare, and now is apparently training with AR-15 rifles[3], despite the fact that IRS agents don’t have a very good record with firearms[4].

But for some reason, getting politicians to see the reality of the situation is exceedingly difficult.:  The waiver system has allowed politicians to take typical Washington cronyism to new heights, and while there have been some challenges to Obamacare from conservatives, the issue of defunding or repealing the Affordable Care Act has never been considered in a truly serious manner in Congress.

The problems created by Obamacare are only going to continue to get worse the longer this disaster of a law is left on the books.:  Maybe instead of trying to further damage our nation with yet another massive bill, this time on immigration, Republicans should be trying to form a Senate “gang” geared toward repealing Obamacare.