Oh, dear God.[1] I’ve warned about single payer healthcare for what seems like forever. Sen. Claire McCaskill showed her true colors and the real intentions of progressives on both sides of the political aisle at a Missouri town hall meeting. There, she came right out and said that she could support singer payer healthcare. Here’s the kicker… a study shows that it would cost us $32 trillion over ten years. We are broke right now. That would finish us off.

And let me just say this… anyone who falls for her ‘comparison shopping’ argument is a brain-dead imbecile and probably should be institutionalized. ‘Single’ means one. To compare, you need more than one. Duh. She also mentions competition, which single payer would entirely do away with. It’s stunning to me that anyone this utterly stupid could be elected to office. But here we are. Morons on parade. 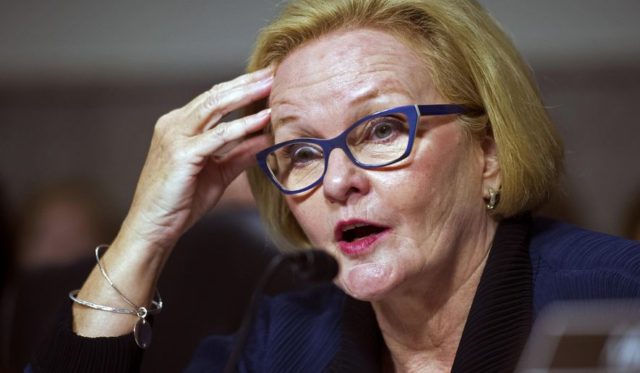 McCaskill admitted that she would remain open to a single-payer health care system if Democrats were able to keep costs down through comparison shopping.

And if we can get those health care costs down through this comparison shopping. And if we can figure out a way to make sure that comparison-shopping doesn’t go away with a single-payer system, that we don’t lose the value of competition, then I think we could consider it. In the meantime, what I think that we should do is put what is a quasi-public option on the exchanges. People between the ages of 55 and 65 are the people that need health insurance the most, and in the Republican bills are going to pay the most.

This is also a flip-flop for McCaskill, who had previously said she didn’t support single payer healthcare. At that time, she almost sounded sane referring to our huge debt. But she has since adjusted her stance as politicians do when they are promised something. In April, she said that single payer was not realistic, but she could envision nationalized healthcare.

Sen. McCaskill serves as one of the four Democratic senators that Republicans have targeted for reelection. Trump won Missouri and McCaskill has endured tight races during her political history. Other Democratic senators the GOP have targeted for the 2018 Senate midterm elections include Bill Nelson (D-FL), Bob Casey (D-PA) and Joe Manchin (D-WV). But while they are targeting the Democrats who support single payer, they better clean out their own house of the progressives pushing it there. Single payer would be the death knell of the US and it’s coming if we don’t stop it and soon.