Senate Is Giving Revised Health Plan A Whirl This Week 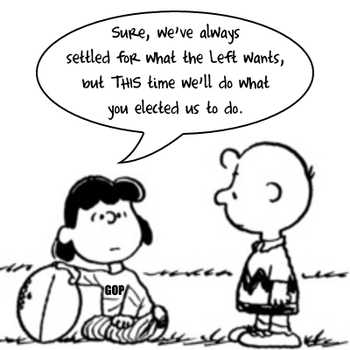 It’s not repeal. It’s not replace. It’s dink and dunk, making a few changes. What will the revised plan look like?

(The Hill[2]) Senate Republican leaders are moving forward this week on legislation to repeal and replace major parts of ObamaCare despite divisions within their conference.

Leaders will brief rank-and-file Republican senators Tuesday during their weekly lunch on the revisions they have made to the legislation in an effort to bridge the gap between moderates and conservatives.

They expect to make the revised bill public later in the week and get a score from the Congressional Budget Office (CBO) before bringing it to the floor for a vote. (big snip)

GOP leaders have tried to woo both sides of their conference by promising $45 billion for opioid treatment, a high priority for moderates such as Sens. Rob Portman (R-Ohio) and Shelley Moore Capito (R-W.Va.), and by looking at new regulatory reforms to entice conservative such as Sen. Ted Cruz (R-Texas).

They have also discussed adding tens of billions of dollars to a $62 billion long-term state innovation fund that is designed to help low-income people with high healthcare costs afford insurance.

Let’s be honest: the plan stinks, and all they’re doing is throwing money out there to woo Republicans to support it. If this is what they want to do, they might as well just fix the structural issues with Obamacare.

But those changes might not be enough to save the bill, given how little room they have for error.

One prominent moderate, Sen. Susan Collins (R-Maine), told CNN, “I do need a complete overhaul to get to a yes.”

I agree, as do most people who’ve been voting for Republicans, and gave them back control of the House, then the Senate, then the White House: scrap this garbage plan, go back to the drawing board, fully repeal Obamacare, and replace it with a workable solution that will

Any plan should include a few of the things stuck in Ocare to make it popular, like allowing children to stay on their parents insurance till  26 (puts more young healthies in the pools), insurance companies not being allowed to drop users for, get this, using the insurance they pay for, and a few others. You can even have a mandate, but, it would need to include some provisions so that people who lose their plans because they changed jobs aren’t penalized.

That said, the GOP leaders will still keep pushing this stupid bill.