I haven’t picked the candidate I’ll be backing for President in 2016, but at this early date, I have to say that Scott Walker is looking pretty good. He’s a governor from a purple state, he could probably flip Wisconsin’s 10 electoral votes our way, he showed he has the courage to stand up for conservative principles when he fought and beat the unions and this seems smart as well[1]. 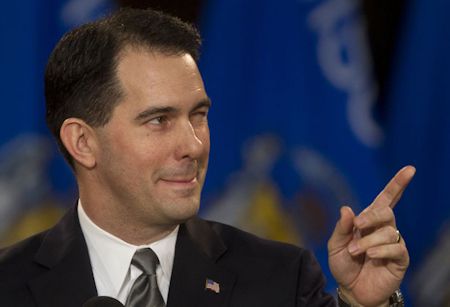 The way South Carolina and Georgia will outlaw Obamacare is by making it illegal for any of the state’s resources or funds to be put towards the implementation of Obamacare, including state exchanges. This is a legal and workable option for the states to fight back.

Governor Scott Walker (WI) has another plan though – and it is gaining steam.

Walker reportedly wants to let the uninsured use tax credits to buy plans offered on the federal online exchanges directly from the insurance companies.

This approach will “let consumers go right to insurance carriers for coverage available through online exchanges,” effectively bypassing Obamacare. However, it will need Health and Human Services’ approval before it could be implemented. Jonathan Gruber, an economist at MIT, says:

If they don’t approve this, this is ultimately exposing that this isn’t really about access and this isn’t about affordability. It’s about government playing a heavier hand in these kinds of decisions.

While it is true that the less money the government nets from American citizens, the better, it remains to be seen whether these tax credits will exceed the amount of money paid in to the government – which would clearly be a problem

If Walker’s offering up a health care alternative that works with the free market, instead of against it as Obamacare does. Walker isn’t just saying “no,” he’s actually offering up a better, free market alternative that’s superior to what Obama is doing. Will Obama go for it? It seems unlikely because Walker’s plan is about benefitting the consumer while Obamacare is about centralizing power and control in the government’s hands. Still, the more viable Republican alternatives out there to Obamacare, the better off we’ll all be.