A first-grader in Pasco County, Florida — no doubt inspired by the theatrically anti-American jackasses comprising the NFL — refused to stand for the Pledge of Allegiance, but rather took a knee. Instead of tanning his hide, his mother sides with the disrespectful 6-year-old:

That boy’s mother is speaking out because of a text message she received from her son’s first-grade teacher about the incident.

“I just wanted to let you know that this morning when it was time to do the Pledge of Allegiance, (your son) went down on one knee. I knew where he had seen it but I did tell him that in the classroom we are learning what it means to be a good citizen we’re learning about respecting the United States of America and our country symbols and showing loyalty and patriotism and that we stand for the Pledge of Allegiance. I know its [sic] a sensitive issue but I wanted to make you aware. Thanks”

“She told him right away, based on what he told me, to stand up and to stop it… That’s not her right.”

Standing for the pledge is state law. No matter; the pint-sized Malcolm X is black. The whole point of the anti-American antics that now define the NFL is to bully people into accepting that laws should not be enforced when they are violated by persons of politically preferred pigmentation, because racism. 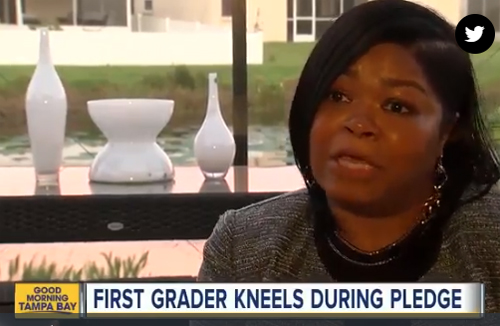 The moonbat mom sides with her misbehaving child.

On a tip from Byron. Cross-posted at Moonbattery.