There are a lot of Monday morning quarterbacks out there who just love to second-guess the decisions police officers have to make in a matter of seconds, decisions that will mean the difference between life and death. Hopefully, this video will shut at least some of them up, as it shows just how fast deadly force incidents happen. 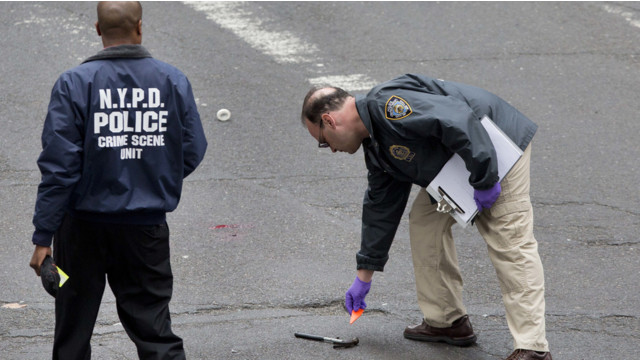 The officers had been tracking the suspect and were about to attempt to take him into custody when the suspect (centered, below) pulled the claw hammer from his bag, raised it over his head, and began coming after the female NYPD officer, who wisely began attempting to get some distance between herself and the deranged attacker.

Baril then either grabs her by her shirt or her hair as she retreats into the street—it is very difficult from the quality of the video to tell for sure—and her partner gives chase, his weapon drawn and pointed at the suspect.

Cognizant of the fact that his partner is in his line of fire, Officer Geraldo Casaigne holds his fire as he closes his distance. The female officer, Lauren O’Rourke, is struck at least three times.

The suspect pulls O’Rourke’s shirt/hair so hard that she is pulled backwards, and she turns in towards him and simultaneously crouches. This motion drops her just out of Casaigne’s line of fire, giving him a split second to act. Casaigne seizes the opportunity and fires four quick shots, the muzzle of his gun just three feet from the suspect. He strikes Baril with two of the four shots. One bullet strikes Baril in the shoulder, the other is a critical hit to Baril’s back.

Baril drops to the ground immediately after being hit, and Officer Casaigne follows him down through his sights as he’s been trained. He quickly assesses the situation and determines that Baril is not longer a threat.

Less than nine seconds after the incident began, Casaigne has already holstered his weapon and is checking on his partner, helping O’Rourke to her feet.

Police officers don’t get polite notice that someone is about to kill them before it happens. They have to be alert, aware, and on the defense at all times, because they are always going to come across people who want to kill them — and those people can strike very, very fast.