Check Out This “Tip” That Cops Left a Cop-Hating Waitress

Under Barack Obama, the Black Lives Matter movement flourished… and so did anti-police sentiments. But you’d think that even cop-haters would be smart enough to keep quiet if they’re a waitress and their table is full of cops. One waitress, unfortunately, was not that smart and she paid for it dearly[1]. 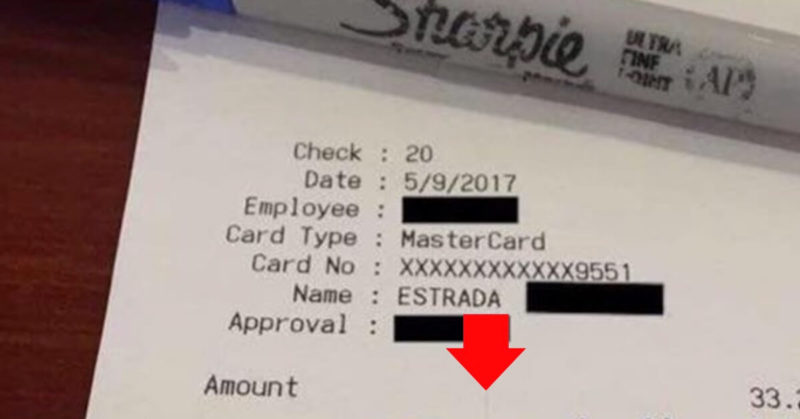 Someone named Officer Daniels posted a picture on Facebook of his tip receipt, explaining that the waitress told him — a cop — that she didn’t like police. He left her a $5 tip, so she wouldn’t be completely stiffed, but had a little tip for her on the receipt.

It’s Customer Service 101 — don’t insult your customers! Now, the waitress may claim that they were not in uniform, but it’s still not smart to say something like “I hate cops” to a table, because they well could be cops… or the wife of a cop, the son of a cop, or the mother of a cop. It was dumb, no matter how you slice it.

Predictably, though, liberal commenters on Officer Daniels’ post were not happy. “You make more than she does, a**wipe,” someone named Brandi Gray wrote. But she was just getting started. “If I’m a waitress, I get to tell you that I hate you if you’re a cop. But please continue to put your life on the line to protect me. And you’d better tip, you c***,” she added.

In what world does that make any sense whatsoever?

Apparently, most people disagree with the waitress and her defenders — the post racked up over 39,000 likes and almost 8,000 shares… probably because people support police officers and not so much smart-mouthed waitresses who wouldn’t know customer service if it smacked them in the face. Being rude to customers is never going to get you far and especially not when the customers are people who put their lives on the line for you every single day.