Anyone who took the time to look deeper into the situation of Officer Eric Casebolt and the McKinney pool party knows that he did nothing wrong. Yet he’s still had to resign — and now it has come to light that before responding to the pool party, he had to respond to two suicide calls. 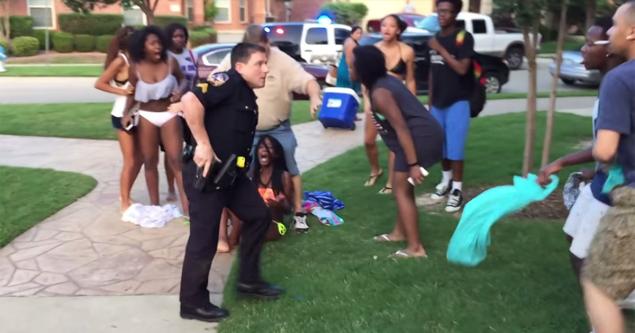 The police officer who quit his job after drawing his gun on a group of teenagers and slamming a bikini-clad 15-year-old to the ground let ’emotions’ get the better of him, his lawyer said today.

Officer Eric Casebolt quit the McKinney City police last night amid protests over his actions, described as ‘indefensible’ by his boss, which was captured on video.

But today his lawyer revealed that he was dispatched to the pool party after consoling the widow of an African-American man who had committed suicide by shooting himself in front of children at a swimming pool, and helping to talk a teenage girl out of taking her life.

She said he had not intended to respond to the call when it came through initially as it was simply about ‘trespass’, ‘given what he had just been through’.

But when he heard a report of violence, he decided to go – despite the toll of dealing with two emotionally-draining calls in the course of just over an hour.

Casebolt began his shift at 6pm and immediately went to the scene where an African-African man had shot himself dead by a swimming pool.

The officer spent time consoling the sucide victim’s widow before leaving on a second call where a teenage girl was threatening to take her own life.

The teenager was preparing to jump from the roof of her parents’ home and Casebolt was among the officers who helped talk her down and arrange for her to be taken to hospital.

Around an hour and 15 minutes after he began work, he answered his third call to help at a complaint of ‘trespass’ at the pool party.

His lawyer Jane Bishkin said: ‘With all that happened that day, he allowed his emotions to get the better of him.

‘Eric regrets that his conduct portrayed him and his department in a negative light.

‘He never intended to mistreat anyone, but was only reacting to a situation and the challenges it presented. He apologizes to all who are offended.

‘That day was not representative of the 10-year service to the community of McKinney, and it is his hope that by his resignation the community may start to heal.’

‘The video that everyone has seen only depicts a small part of Eric’s actions that day.’

She said the officer is now in hiding for his own safety after receiving death threats by phone and email following the video being placed on the Internet.

Daniel Malenfant of the McKinney Fraternal Order of Police Lodge #107 said: ‘Cpl Casebolt was a dedicated and decorated officer who in this instance was placed in a high-stress environment that he was not fully prepared for.

‘This incident and the seven minutes worth of video does not fully depict Eric’s moral and ethical character, along with his contributions.’

People are taking delight in persecuting this officer because seeing the job that a cop has to do isn’t always pretty, but they completely ignore the fact that like all other cops, Officer Casebolt is only human. How would these armchair quarterbacks be acting after responding to two suicide calls and then a call to try to help dissipate a violent mob of drunk teenagers? We have moved from expecting law enforcement to behave according to the law, to expecting them to puke rainbows and unicorns in the process as well so that everyone can feel all warm and fuzzy afterwards, which is an idea that no human being could possibly live up to, and especially not in the difficult line of work as a police officer.