Good for these officers.[1] Two of the officers that Marilyn Mosby went after over the Freddie Gray case are now suing her. I hope they win big time. She knew they did not ‘kill’ Freddie Gray. The whole thing was trumped up to begin with. Sgt. Alicia White and Officer William Porter are filing a suit that charges Mosby with making false claims against them and that the over-the-top charges and heated rhetoric were to cover her ass during the riots that followed. The woman should be disbarred for what she did and should be removed from office. She’s a pandering racist and did immeasurable damage to the police and the city of Baltimore. 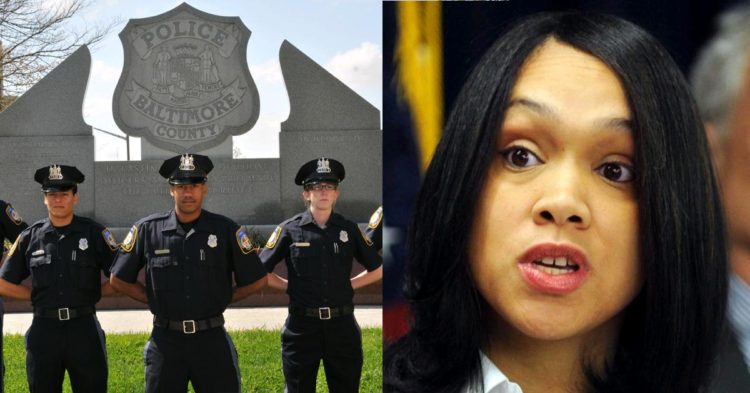 Sgt. Alicia White and Officer William Porter[3] filed suit on May 2, according to court documents obtained by The Baltimore Sun. They allege in the suit Mosby publicly made false claims about the officers at a press conference May 1, 2015, and that the harsh charges and Mosby’s tough rhetoric after Gray’s death were to keep the peace at their expense after riots ravaged the city.

“These among other statements were made not for the purpose of prosecuting crimes that had allegedly been committed by White and Porter, but rather for purposes of quelling the riots in Baltimore,” the lawsuit reads.

The lawsuit is demanding $75,000 per each count, which includes two counts of defamation and two counts of invasion of privacy. “They exposed plaintiffs to public scorn, hatred and contempt, thereby discouraging others in the community from having a favorable opinion or associating with plaintiffs,” the lawsuit says. The suit also targets Maj. Sam Cogen of the Baltimore Sheriff’s Office claiming he knew the charges were false. The state’s attorney office has not commented because of a gag order surrounding the case. Perhaps for a change, justice will be done here. This is the kind of lawlessness that Obama encouraged and is still encouraging. It will take many years to undo what he has done to the police and to America. Best of luck to these officers. They deserve far better and Mosby deserves far worse.