The controversial painting depicting cops as “pigs” who shoot “black criminals” has received an official update. It will be officially removed, as ordered by the architect of the Capitol. Sounds like a victory for us, but Democrat Lacy Clay will be FURIOUS when he wakes up to this news.

The painting[1] has been the focal point of a battle in which Republicans took it down, but racist cop hating Democrats kept putting it back up. 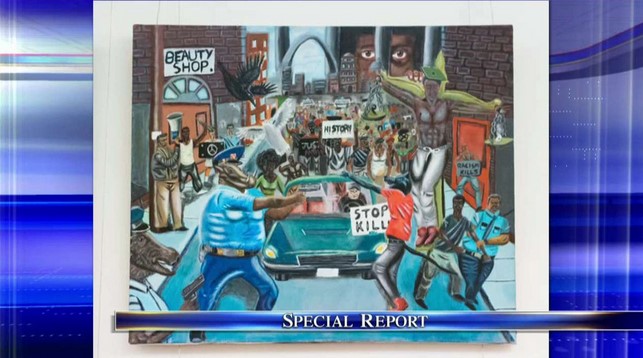 The controversial painting that depicts policemen as pigs will be seeing its final days on the walls of Congress next week, as the architect of the Capitol ordered that it be removed.

Stephen Ayers, architect of the Capitol, told Fox News[2] Friday that the painting violated rules of the House Building Commission and would be removed from Congress on Tuesday.

Rep. Dave Reichert wrote to Ayers asking that the artwork be taken down, claiming it was a “clear violation of the Suitability Guidelines outlined in the official rules for the competition,”

This painting stems from the events that took place in Ferguson, where an officer gunned down Mike Brown. After the violent criminal was gunned down, local residents rioted and looted their neighborhoods, essentially destroying Ferguson.

The painting was created by a high school student and won a contest to be displayed in the Capitol building. However, with anti-cop propaganda, it is highly inappropriate to display. Democrats insist that it remain hung, in particular, Lacy Clay, who kept putting the painting back on display whenever a Republican took it down.

Clay even called the removal of the painting “thievery,” which shows he doesn’t even know what the word means. No one stole the painting, they just took it down. Most likely, it was set on the floor. That means it wasn’t stolen, just moved.

I’m not sure anyone would want to steal that painting anyway.

Not that the artist did a bad job, but it’s just the exact opposite of what’s true in America.

The painting should have focused on the majority of police who risk their lives and work extremely hard for us every day Americans.

They deserve more respect than we can offer, even if we get caught speeding and receive a ticket once in a while.

That’s our fault anyway, even though we don’t want to admit it!