END OF WATCH: Hundreds line up to pay final respects for trooper killed in crash

Hundreds of mourners lined up outside a Hudson church Monday to pay final respects to Massachusetts State Police Trooper Thomas Clardy, who was killed in a crash on the Massachusetts Turnpike last week. This is a truly touching story about the dedication of folks to a beloved trooper:[1] 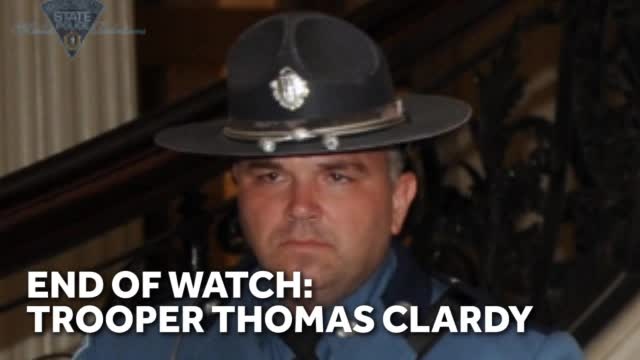 The wake for Clardy, 44, was set for Monday from 2 p.m. to 7 p.m. at Saint Michael Parish in Hudson. Mourners were lined up around the block. Massachusetts Gov. Charlie Baker was also on hand to pay respects.

State police said 1,120 law enforcement officers participated in the walk-by at the wake. They said the information was gathered by one of Trooper Clardy’s daughters, who counted every trooper and officer who passed through to pay respect to her father.

The funeral will take place Tuesday at 11 a.m. at Saint Michael. He will be buried at the Saint Michael Cemetery.

Clardy was performing a traffic stop Wednesday on the westbound lanes of the Mass Pike in Charlton when his Ford Explorer was hit by a vehicle driven by David Njuguna, 30, of Webster.

Clardy’s vehicle was pushed off the highway and was heavily damaged. He was taken to a hospital where he was later pronounced dead.

Clardy was on an “accident incident reduction shift” that is designed to prevent crashes. He had pulled over a driver in a Chevrolet Tahoe for a violation and was working in his cruiser when Njuguna swerved across several lanes and slammed into the cruiser.

Njuguna was also taken to a hospital with serious injuries. He was served with a criminal summons charging him with negligent operation of a motor vehicle and failing to stay within marked lanes.

Njuguna’s license has been revoked.

In lieu of flowers, donations in memory of Trooper Clardy may be made to: The Clardy Children’s Fund, C/O Avidia Bank, 42 Main Street, Hudson, MA 01749.