Once upon a time, when a parent found out their teenager had committed a crime, they didn’t make excuses for their behavior or blame police for the consequences. Things are different today, though. Case in point? These parents who blame police after their daughters made the horrible decision to steal a car[1], lead police through a high-speed chase and ultimately died after wrecking the stolen car. 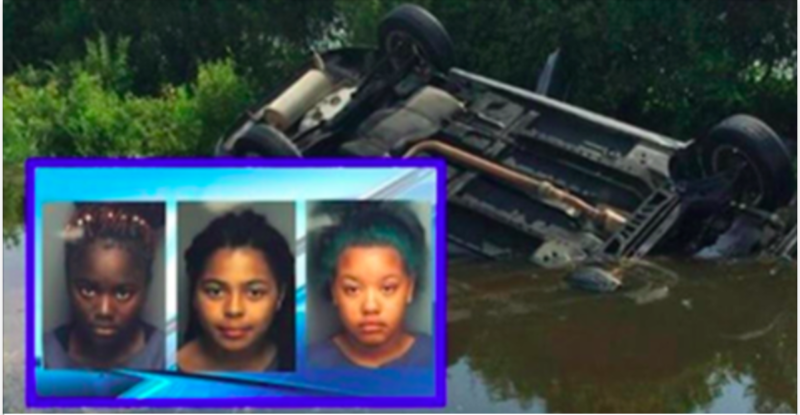 In 2016, three teenage girls in St. Petersburg — Laniya Miller, 15, Ashaunti Butler, 15 and Dominique Battle, 16 — asked a 36 year-old man for a ride. He asked if he could stop at Walmart before dropping them off at their destination, but when he stopped, they stole his car. The owner of the vehicle immediately reported the car as stolen and it didn’t take long for the Pinellas County Sheriff’s Office to find the car thieves.

The police officers began following the girls, who did not stop when commanded. Instead, they did the exact opposite: they maintained a high speed while driving around a sharp curve. They then lost control of the vehicle, driving off the road and into a pond. Within mere minutes, the car was completely submerged. All three girls died.

But who do the families hold responsible for the deaths of the girls? Not their daughters, but police, who they say were neglectful for not saving them.

Dashcam footage was released showing officers standing and looking at the pond while the car sank. “It’s going all the way down. It’s almost fully submerged,” one officer is heard saying. “I hear them yelling, I think!” Another officer responds, “They’re done. They’re done. They are sig 7, dude.”

The footage released does not show any of the officers attempting to rescue the girls. And according to Michele Whitfield, an attorney representing families of two of the girls, said that the video raises questions. “I just feel like at this point, the Sheriff is giving an appearance of transparency,” she said. “There’s still some documents that I am waiting for.”

There’s just one problem: the footage being circulated wasn’t the full video. And the sheriff’s office responded on its Facebook page to set the record straight, and linked to the full video, which showed officers trying to enter the water to save them.

Unfortunately, it was too risky for officers to enter the water. “Myself and other deputies began to enter the swampy water,” Deputy Jeff Clement explained. “The fact that the vehicle was still moving, along with the unstable ground and excessive water vegetation, made a rescue too risky for those involved.”

What happened to these girls was certainly tragic and they didn’t have to die. But unfortunately, their deaths were due to their own actions. And in this case, they certainly are not victims.