Miosotis Familia was murdered while sitting in her police car, which is something we’re seeing with increasing frequency.

During her funeral, New York Police Commissioner James O’Neil took the time to bash organizations like Black Lives Matter who are doing nothing to discourage the execution of cops. LEOs are people like you and me except they’ve decided to take on one of the most thankless professions in the world. 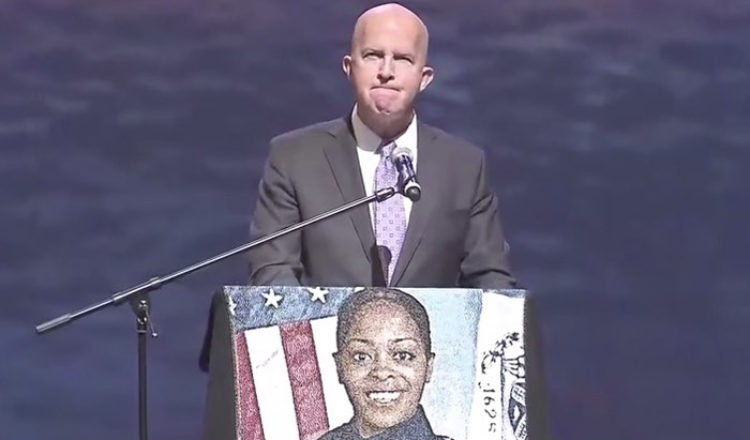 He challenged[2] the professional demonstrators in their beliefs, wondering why there was no march for a black woman who was taking care of her elderly mother as well as the three children she was raising by herself.

“Let me tell you something. Regular people sign up to be cops. They sign up for this job of protecting strangers, knowing there are inherent risks. But not one of us ever agreed to be murdered in an act of indefensible hate. Not one of us signed up to never return to our family or loved ones.

“So, where are the demonstrations for this single mom, who cared for her elderly mother and her own three children?”

NYPD Police Commissioner is applauded at slain cop's funeral: “Where are the demonstrations for this single mom…why is there no outrage?” pic.twitter.com/11fTjy38Du[3]

Where is the outrage from the “hands up don’t shoot” crowd of journalists who desperately cling to any narrative that they believe will up their viewership? Why are none of these groups standing up for an African-American woman who was brutally slain by a thug? Are they silent because the perpetrator isn’t a white, Christian, conservative male?

Hypocrites come in all colors, you guys. These guys just happen to be the worst.