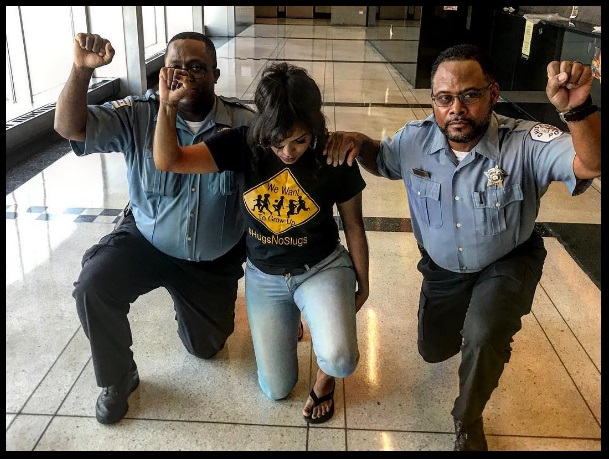 Instagram user and Black Lives Matter pusher EnglewoodBarbie walked into a Chicago police station and somehow managed to get two cops to protest themselves. Except, it’s not a joke being pulled by a Republican, this was a serious action taken by a woman who is trying to make a name for herself by race hustling.

In the post that has over 2,500 likes and hundreds of comments, EnglewoodBarbie writes:

For starters she spelled the surname Kaepernick wrong and secondly she managed to get two cops to protest themselves. If Colin started his kneeling to protest police violence against blacks, then getting two black police officers to protest is mystifying. Why would you support Kaepernick when his whole shtick is telling you, a police officer, that you’re a racist piece of trash who likes to kill black people for fun? And the kneeling meme goes further — if you haven’t heard, Kaepernick’s foundation recently handed $25,000 over to an organization devoted to honoring a cop-killer.[2]

There are so many comments on the ‘gram that I could only pull a few to show you both sides, with some of these sentences being taken from longer paragraphs:

“When in uniform police need to remain neutral. Also doing the “right” thing is subjective.”

“…please let me know where I need to call to voice my support of these officers and condemn the punishment they’re receiving from their department.”

“lmmfao nah not really just that an ignorant piece of s**t like you will never understand, because you’re WHITE! now go have a seat with your white privileged a**”

“Our fascist president being a racist does not make taking a stand against police brutality a political issue!”

“…when wearing the uniform, these officers are not a part of the general public, and therefor certain rights do not pertain to them while on the job. So I agree with them being reprimanded.”

Even with the reprimand, this user is still posting photos of kneeling cops. Here’s one from two days ago:

Personally, I think the funniest part of this debacle is that EnglewoodBarbie is now angry that The Root, a pro-black social media presence and magazine, has taken her Instagram photo and put their own watermark on it.[5] Maybe she should call the police and report a copyright violation?