Leftist Protester Attacks Black Boston Cop Because: ‘You’re Supposed To Be On Our Side!’ [VIDEO]

Black Lives Matter activists have been targeting police since the movement began and they haven’t slowed down once. Black Lives Matter marches have included calls for violence against police and silence when black officers have been injured or killed in the line of duty. And now, at a recent protest, a protester verbally attacked a black officer[1] for not being on “our side.” 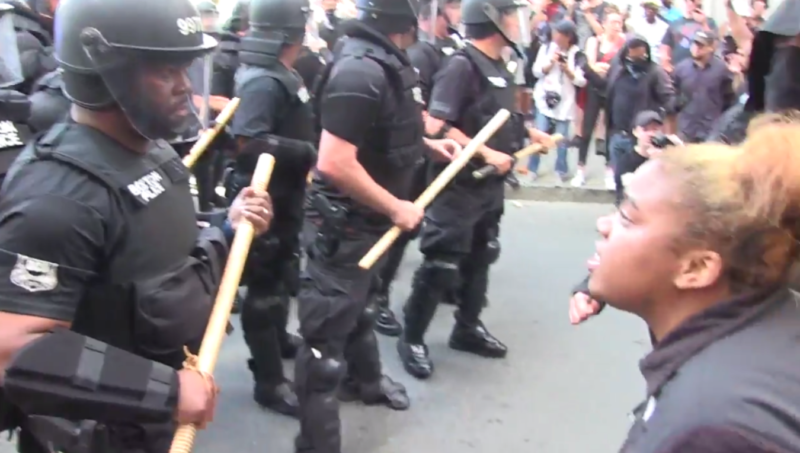 Saturday, protesters converged on downtown Boston, with members of both Black Lives Matter and Antifa participating. But before the liberal protest started, free speech protesters were there first.

The original group was rallying peacefully and Donald Trump praised them for it, as well as Boston Mayor Marty Walsh and police.

Our great country has been divided for decades. Sometimes you need protest in order to heal, & we will heal, & be stronger than ever before!

I want to applaud the many protestors in Boston who are speaking out against bigotry and hate. Our country will soon come together as one!

But soon, the liberal protesters showed up, with an estimated 40,000 activists. And then, things quickly turned violent, and it was police themselves who were the targets. As officers lined up in riot gear, the liberal protesters threw bottles of urine at the officers, screaming racial slurs and spitting on them. It was one protester in particular, however, whose actions went viral.

My footage from Boston: violent clashes between the police and protesters. pic.twitter.com/S1vWB0hDV0[7]

Ultimately, 27 arrests were made, with the Boston police commissioner confirming that the protesters were throwing bottles of urine and other items at the cops.