The really tiresome thing about this culture of political correctness is that anything can be deemed racism, or sexism, or homophobia — all it takes is an “oppressed” minority group not liking it. So naturally, liberal racemongers are whining that saying “blue lives matter” is white supremacy”. 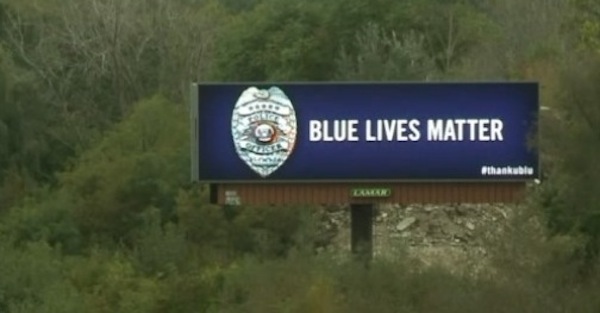 The Grio, the NBC News website “devoted to providing African-Americans with stories and perspectives that appeal to them,” declared billboards proclaiming “Blue Lives Matter” to be an example of white supremacy.

Writer Lincoln Blades writes, “when I heard that advertising agencies were planning to post billboards honoring fallen police officers, I immediately thought it would be a great idea. But, once I saw the actual billboards themselves, with the words ‘Blue Lives Matter’ printed boldly across the billboard, I instantly felt sick to my stomach.”

… Specifically using the words “Blue Lives Matter” as a counterpoint to “Black Lives Matter,” the ridiculous and anti-intellectual creators of this campaign have firmly decided that propagating their white supremacy will be best masked under the guise of mourning men and women who died in the line of duty.

What these morons don’t understand is that on the police force — or in the military, or as a first responder — it’s no longer about race, as they’re all brothers in service. But then, we couldn’t possibly expect liberals to be colorblind, could we?