I don’t know what this guy’s malfunction is, but someone needs to get him on some medication as soon as possible.

In civilized society (where he obviously doesn’t live), we don’t just walk up to people on the street and start hurling racial epithets at them and threatening them. This is nothing more than a pathetic attempt at attention seeking. 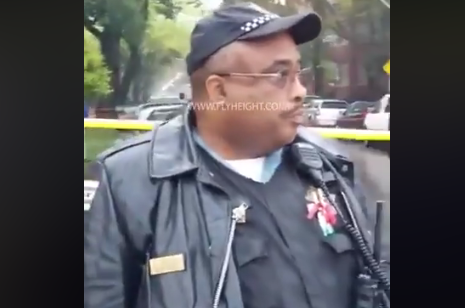 This video is full of coarse and vulgar language and racist language, so if you don’t want to be exposed to that kind of thing, I recommend not clicking on the video. That being said, if you want to see how awful that some of the people in Chicago are to their police force (including the black Americans serving and protecting the people of the city), then I would recommend watching. If you do click in, make sure you start on a low volume because the background noise is dulled, his screeching is loud and shrill and frankly, obnoxious.

I don’t think even Lil Wayne could find a way to fit that many “n” words into such a short amount of time, but I commend this guy for managing to do it. If there was an award for being a terrible person, he would be a top contender, that’s for sure.

These officers are out in the street, obviously working a crime scene and this thug decides to come up to them and harass them, insulting their race, their mothers, their occupations and saying that he is “ready to die,” which to me insinuates that he’s trying to be a martyr and coax an officer into harming him so he can get on the news. Again, attention seeking.

This guy and those like him are part of the problem. They are fueling the divide between officers and minority communities instead of trying to heal the gaping wounds that are causing violence in the streets. They refuse to become part of the solution and it’s making life harder for everyone around them. This isn’t helping.

I would love to see fewer videos like this and more videos of minorities who have an issue with law enforcement sitting down and learning how to work together to protect their communities and have the best possible relationship. It doesn’t benefit anyone to have this “cold war” going on in the streets. We’re only going to solve this issue with unity, not hateful rhetoric like this guy is spewing.