Since when was it acceptable for you and your friends to block off a public road and make the lives of everyone trying to get somewhere, miserable? The answer is never and the NYPD are loud and clear[1] about that when these ridiculous roadblocking protesters take it too far. 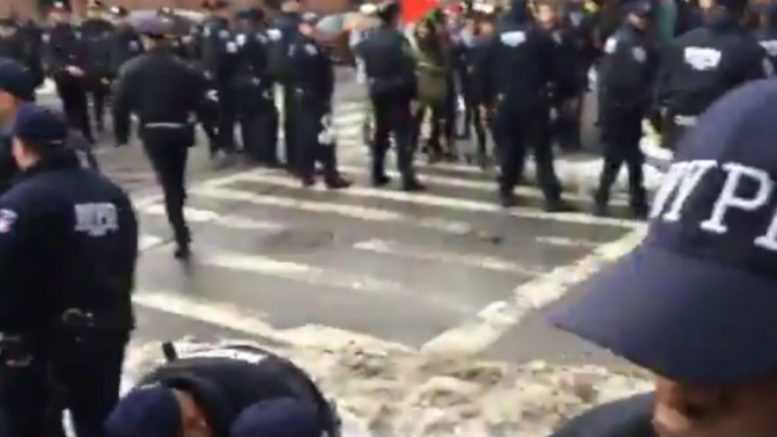 If more police departments around the country would stop caring about the media with its left-wing agenda and responded to the call like the NYPD did, then people would stop blocking traffic and regular hardworking folks as a way of “protest” for whatever screwed up ideological mess they are spewing at the time.

These people were warned and given every opportunity to change their disruptive ways and start acting like adults. They didn’t heed the call, so when that happened, NYPD handled the nuisance crowd and sent a real strong message that blocking roads and hindering traffic will NOT be tolerated in their town.

They were warned, but still persisted. NYPD started arresting people at #NoNosVamos[3] march for obstructing traffic. Thank you, NYPD! pic.twitter.com/5Pl69TfpUf[4]

Do these idiots not realize who they are hurting? PEOPLE! They are hurting the very same people that could actually listen to them and may agree to join their cause. But no. They all have to be scum bags and make if crystal clear to everyone that they don’t deserve any support. There is a right to protest, but nowhere in the Constitution does it say that blocking traffic and keeping folks from getting to work, getting home to their kids, preventing first responders, doctors, etc. is an acceptable practice.

Your First Amendment rights do not and have never included whatever floats your boat at whatever particular junction in your life. Grow up children. Your ability to block the streets gives you zero sympathy points. In fact, you just piss everyone off.

As for the ones commenting in the video, complaining that the two being arrested didn’t do anything wrong – those folks are in the same boat. There is no sense of justice, or right or wrong to them. Everything is totally twisted.