San Diego is the latest[1] to see a cop killing – it happened in the early hours of this morning as two officers with the gang unit did a traffic stop. The killers shot both of them and one officer died after he got to the hospital. The other is now in surgery fighting for his life. They caught one of the suspects – they found him in a ravine. He is Hispanic. Not long ago, gangs put out the word that there would be rewards and status given to those who took out cops – extra status for taking out a federal agent. This fallen officer follows five killed in Dallas and three in Baton Rouge. Not all of it may be Black Lives Matter, but all of it is damned sure terrorism. 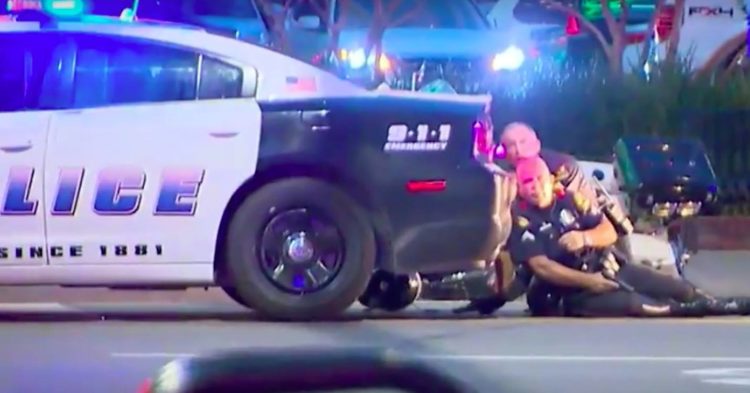 Following the killing of eight police officers in Dallas[3] and Baton Rouge[4]earlier this month, another officer has been killed[5] in the line of duty.

It all happened around 11 p.m. PT Thursday night, when the San Diego Police Department announced on Twitter that two of their men had been shot during a traffic stop:

One of the two officers died at the hospital, according to NBC News,[6] after sustaining “multiple” gun shot wounds to his upper torso.

While his identity has not yet been released to the public, SPD Chief Shelley Zimmerman said he leaves behind a wife and two children. Both men were members of the department’s gang suppression unit.

The officer who is in surgery is expected to survive thank goodness. But a wife and two children lost their father and husband this morning and we all lost someone who protects us. The police are now saying they believe there was only one shooter and they have him in custody. I hope they are right, but the assassination of cops is on-going and police everywhere are on heightened alert. This also could have been a targeted attack on cops. It seems like every day now we lose one or more officers. This has got to be stopped.