Police officers are like a family — they take care of their own. So when the daughter of one of their fallen brothers graduated high school, there was no way they were going to miss it. 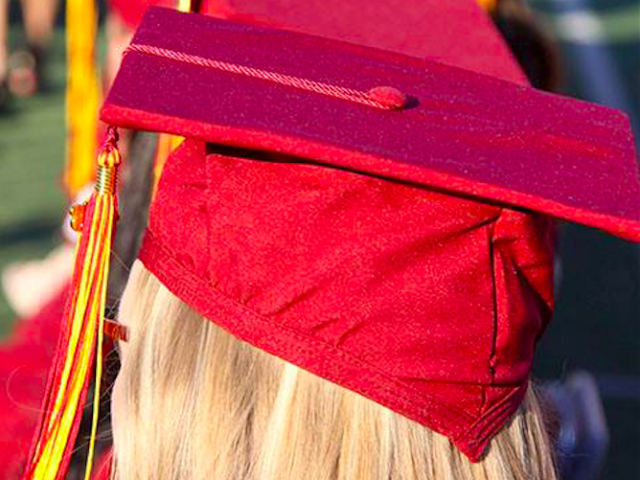 Sierra Cuesta never knew her father, Officer Fil Cuesta, who died when she was four weeks old. But she was raised by his partners and colleagues in the LAPD, who comforted the Cuesta family and have been with her at every milestone in her life since.

They were present again at the commencement exercises of Esperanza High School in Yorba Linda, California. ABC 7 Eyewitness News reports:

Sierra Cuesta stepped up to accept her diploma at Esperanza High School, with her proud mother and a large section cheering her on. Among those in the crowd were several LAPD officers, men and women who have become her family.

The officers worked with her father before his tragic death and they’ve known Sierra since she was an infant.

“Eighteen years ago, when we talked to the family at the funeral we told them – Sierra and Samantha, his children – for the next how many years you’re going to have another 20 to 25 moms and dads,” LAPD Officer Don Poirier said.

According to ABC 7, the daughters feel they are lucky: many of their classmates are missing a parent in their lives, and have no one to fill the void.

Officer Cuesta was killed in his patrol car in August 1998. The Los Angeles Times reported at the time:

Cuesta, a 26-year-old gang specialist, was mortally wounded as he and his partner, Officer Richard Gabaldon, waited for other officers to help them break up a loud party early Sunday near Jefferson Park in South Los Angeles.

Throughout the LAPD on Monday, downcast officers put black bands around their badges to mourn Cuesta’s death. Meanwhile, department psychologists met with officers from the Southwest Division–where Cuesta was assigned–to help them cope with the tragedy.

“The mood in the station is very somber,” said Capt. Jim McDonnell, who supervises detectives at Southwest. “It’s like losing a member of your family.”

The shooting was particularly upsetting to police because of its callous and senseless nature. Cuesta leaves a wife and two young daughters, ages 18 months and 4 weeks.

“Of all the cowardly acts I’ve witnessed in this business, this is the most cowardly,” said Deputy Chief Martin Pomeroy. “The fact that his two children could be deprived of their father’s love in this manner is absolutely appalling.”

This is an amazing, noble gesture and truly shows the depth of the bond officers share with each other. God bless our nation’s police officers!