Wow! This is the difference[1] it makes with the police when you have a real leader in the White House. When the police know they have a President on their side, they actually feel free to do their jobs. In liberal Portland, Oregon, protesters found out the hard way that defying the police is going to be uber painful. You see riot police march up to a bunch of these asshats blocking traffic and hanging onto a bus as they excitedly say, “Here they come!” Careful what you wish for idiots.

The police grabbed protesters and threw them to the ground… violently. Which is what they deserve. They arrested six of the goons with residents cheering on the sidelines, chanting: “Take them all down!” An elderly woman can be seen giving the thumb’s up to the officers. It’s a new day with a new sheriff in town and police are about to make examples of these thugs. Good. Reinstate the rule of law. It’s long overdue. I have a daughter, her husband and three grandchildren near there and I feel they are safer because of this. Of course, I have one weenie nephew who will be appalled… oh well. Good times. 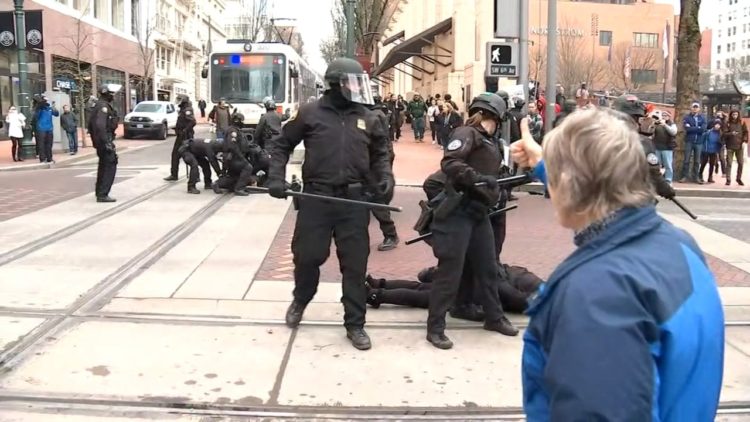 Portland Police responded quickly and decisively to a group of protesters blocking traffic in the city Wednesday, running one of them right into the ground in dramatic footage posted online.

About a dozen police in riot gear approach the scene of the protest in the video posted to Facebook[3] by a local outlet, where agitated bystanders had gathered around the protesters as they blocked traffic. One man had climbed onto the front of the bus. “Here they come,” one onlooker says excitedly.

The police quickly descend on the group and literally flatten a number of them, pushing them to the ground and surrounding them as bystanders cheer them on. “Take them all down!” one man is heard shouting repeatedly in the background as they begin to arrest the black-clad protesters. An older woman gives the police an enthusiastic thumbs up.

Police arrested six people[4], in addition to other arrests in a different part of the city where protesters also gathered.

Police also arrested others at a different protest across town – a total of 14 were taken into custody. Rather than obtain the permits required by law to hold a demonstration in the city, the protesters intentionally organized their march in secret, reports The Oregonian[5]. Police had used force on a large group that gathered to protest Trump, organizers said, so this time they were going to spread out in smaller groups without giving the police a heads up. That didn’t work out quite the way they envisioned. They got a well-deserved thumping before being carted off to jail.

Protesters at the scene who were not taken into custody by police were heard making plans to break into smaller groups to take action around the city. One group got on a MAX train to the east side of the city, marched across the Steel Bridge and then down Martin Luther King Jr. Boulevard, blocking traffic along the way. Some protesters were seen wearing gas masks, while others attempted to pull a dumpster into the street. This won’t end well for these rioters. Take note guys… the police have had enough and are now going to treat you like the radical thugs you are.