Police NOT Allowed To Carry Guns At Chicago Airports Told ‘If evacuation is not possible – HIDE!’

This has to be the dumbest thing I have read in a LONG time. Police are not allowed to carry guns at Chicago airports (because everyone knows that there is such great gun control laws in Chicago, hence, the low crime rate). The ridiculous way that they are told to respond will make you cringe[1]: 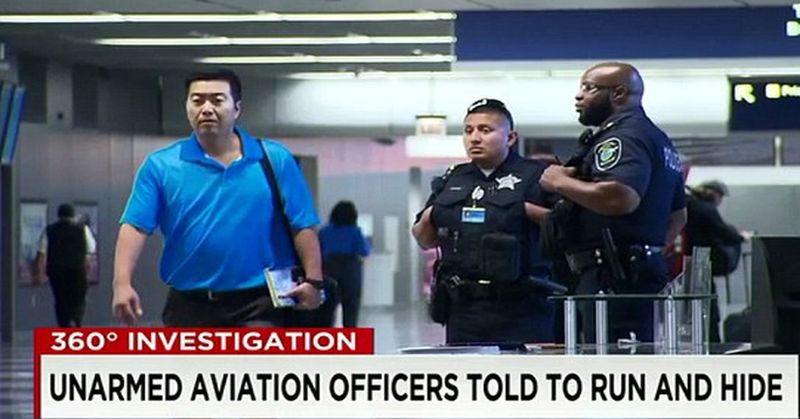 Aviation police officers who guard two Chicago airports have been advised to run in the case of a shooter threat.

Aviation police are told to evacuate or conceal themselves if they’re unable to flee regarding active shooter threats, according to an investigative report from CNN.

The news outlet reported internal documents advise: ‘IF EVACUATION IS NOT POSSIBLE: HIDE.’

According to CNN, approximately 279 aviation police are at the airports.

The news outlet reported they’re warned in a video: ‘If evacuation is not possible, you should find a place to hide where the active shooter is less likely to find you.

‘Block entry to your hiding place and lock the door.’

Chicago Police Department officers stationed at both airports — unlike the aviation police — do have guns, CNN explained.

Regarding ‘the current security structure in place, violent crime incidents at O’Hare and Midway airports are extremely low — ensuring that the millions of passengers who fly through Chicago each year feel secure at the airports,’ Kilmer told the television station.

Services Employees International Union Local 73 secretary-treasurer Matt Brandon told CNN: ‘And that’s amazing these men and women are sent to the Chicago police academy, and trained as police officers, and being a former police officer, I know your first instinct is to go to the problem — not run away from the problem.’

An unnamed aviation police officer also spoke to CNN, saying: ”We’re nothing but casualties if you tell us to run and hide.

‘And how can the public look at us if they see police officers running and hiding?

‘That goes against the very oath we were sworn to that we took.’

This is the stupidest thing EVER. Really, who tells police officer to run and hide?