Police officers are routinely vilified in the media, painted as trigger-happy racist monsters eager to open fire on whatever innocent person they happen to come across. But in reality, most officers are good people just trying to do their jobs and keep our communities safe. Take, for example, this interaction between a police officer and a little girl running a lemonade stand[1]. 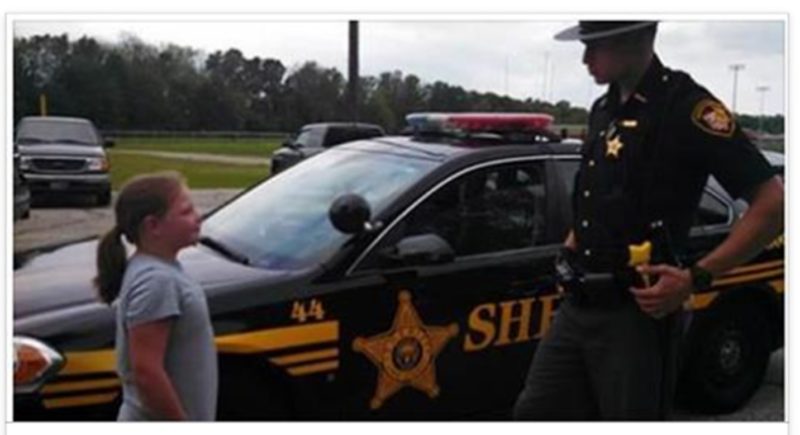 Lake County Sheriff’s Deputy Zach Ropos was patrolling in Painesville, Ohio when he came across a lemonade stand. 9 year-old Gabrielle noticed him, and she quickly ran up to him with a glass of lemonade. “I see a little girl come running up to my police car,” said Ropos, 22. “She hands me a glass, I hand her a few bucks. I asked her what she wanted to do with the money… she said she’d get an iPad, to help with school and play games.”

Ropos admired her work ethic and remembered that he had an old iPad at his house that he wasn’t using anymore. So. he told Gabrielle’s mother that he would get it and bring it back to her the next day. But his plan didn’t work out as planned — when he got home and checked it, the iPad didn’t work. “I went home that night, fired up the iPad, but it just wasn’t updated anymore… nothing really worked on it,” he said. But he didn’t want to let Gabrielle down, so he came up with a new plan.

He went to a store to find her an iPad and asked if they would chip in to get her a tablet. He then arranged to meet with Gabrielle and her mom, and found out that Gabrielle truly is an exceptional girl. “I talked to the little girl, gave her a speech about how courageous and admirable I think her efforts were to save up her money,” he said. “I asked her how much she saved up and she said she only had a few dollars.”

Gabrielle then told Ropos that her mom had run out of gas recently and so she had given her money from her lemonade stand to fill up her gas tank. “When she told me she gave the money to her mom … that’s when I almost started crying because of how great of a kid she really was,” Ropos said. And it was then that he gave her the big surprise: a brand new tablet. “She just wouldn’t stop hugging me,” he said. “Seeing her face is how I remember Christmas when I was 5 years old. She couldn’t stop smiling. Her smile was worth a million dollars.”