A Houston-area woman says a teenage cashier at a Kroger supermarket in Spring, Texas, stepped away from the cash register and refused to check out her groceries last week because she was offended by the message on the customer’s T-shirt. It read: “Police Lives Matter / All Lives Matter.”

The incident occurred just a week after a similar situation in Alexandria, La., when a police officer in uniform said a cashier declined to check out her groceries.

That too was at a Kroger store.

In Texas, the woman, who says her husband is a police officer and gave only her first name — Meredith — told KTRK Eyewitness News:

“She was stating that the shirt I had on was basically a slap in the face to her and she was doing everything she could not to cry. She made me feel ashamed to have the shirt on, and I don’t appreciate that.”

Evidently the cashiers were not fired for refusing to serve customers, as would have been the case if they had refused to serve a transvestite/black/Muslim/etc. Instead, Kroger issued a statement dripping with P.C. gibberish about “our company values of Diversity and Inclusion.”

Yet when a mob of entitled Black Lives Matter types start looting a Kroger store, it won’t take long for the management to call the police. 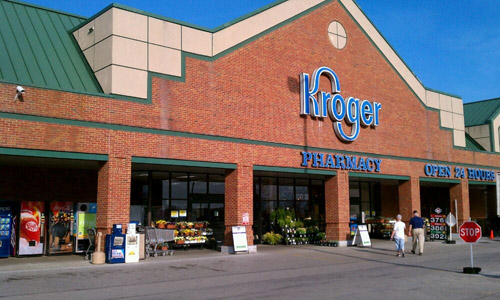 Could not stay in business without the police.