Pool Party Teen: We Didn’t Have to Listen to Cops Because ‘They Called Us Names’

People who play the victim are always going to find an excuse to avoid consequences for their actions. And in the case of the violent, unruly teens who invaded a quiet neighborhood pool in McKinney, the excuse now is that apparently their actions were justified, because the cops called them names. 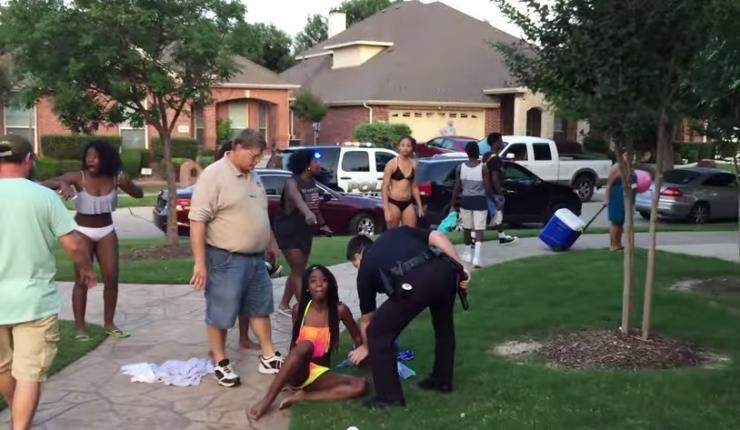 Appearing with her godfather on “Hannity” Tuesday, a girl who attended Friday’s pool party where a police officer drew his weapon on a group of teenagers in McKinney, Texas, tried to excuse the behavior of the teens in the video.

“He started cussing at us first,” Ladariene McKever told Hannity. “No one’s going to listen to him if [he’s] calling us names for no reason.”

Apparently, the teens in the video seem to believe that only polite officers can give lawful orders.

Her comments demonstrate a troublesome attitude among certain communities, where disobeying the police is considered acceptable under various circumstances.

While the teens in the video might not have liked any of the cops on scene, their antagonistic behavior cultivated an environment that was increasingly dangerous for everyone involved.

The claim that the teens in in the video resisted arrest and refused lawful orders simply because the cop used foul language is sadly illustrative of a culture that has been conditioned to distrust and disrespect authority.

McKever’s godfather, meanwhile, whose daughter actually shot video that rocketed around the Internet and roused the country, spent most of the interview debating Hannity on the cop’s use of force.

He seemed unfazed by the girl’s attitude toward disobeying lawful orders.

First, these teenagers should understand that no rational person is going to believe a word that comes out of their mouths. Second, for the sake of argument alone, even if the cops did use rough language — so what? That doesn’t make it OK for them to resist the cops and behave in a threatening manner towards them, nor does it excuse their violent, unlawful behavior before the cops showed up. Yet as usual, the adults in their lives allow them to have these insane views and make excuses for their lawless behavior, all while blaming everyone else for their own actions.