Remember that gross anti-cop piece of “art”? A GOP congressman had the same idea we all did… [VIDEO]

I have the greatest respect for Duncan Hunter.[1] Years ago, I had a very dear friend that at one time was a Navy SEAL. He was involved in a freak accident that paralyzed him from the neck down. Duncan Hunter helped him because I asked him to. He didn’t know me, he just did it. My friend has since passed away, but I have never forgotten what Hunter did for him. So, I’m not surprised it was Duncan Hunter who had the stones to do what others should have done to that obscene painting that Lacy Clay had displayed in the Capitol depicting cops as pigs.

Hunter walked up to the piece of trash and with the help of a few colleagues, they unscrewed it and took it down. They took it to Clay’s office, which is better than it deserved. Duncan Hunter was very, very angry over that racist, cop-hating painting as was most of America. Police must be cheering over this… I know I am. Good for Duncan Hunter… he is still one of my heroes. 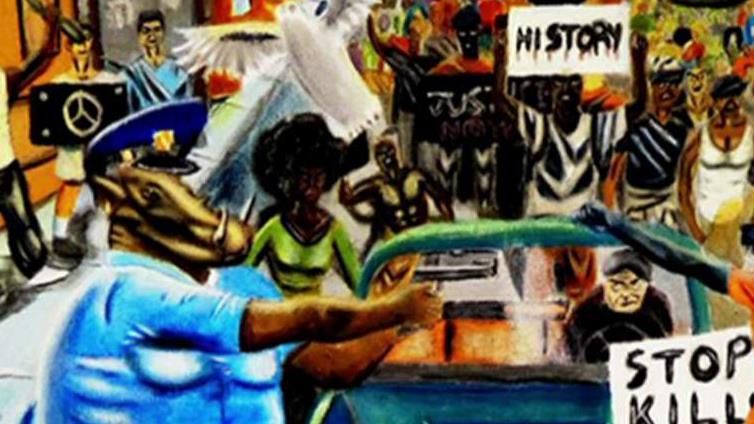 A Republican congressman took matters into his own hands Friday and personally removed a painting depicting police officers as pigs that a colleague had allowed to be displayed at the U.S. Capitol complex.

“I was angry,” Rep. Duncan Hunter, R-Calif., told FoxNews.com. “I’ve seen the press [reporting] on this for about a week or so. … I’m in the Marine Corps. If you want it done, just call us.”

Hunter said he walked over to the artwork Friday morning with a few colleagues and unscrewed it. He then delivered it to the office of Rep. Lacy Clay, D-Mo., the congressman whose office had allowed the piece to be displayed. The painting, hanging since June, was done by a high school student who had won Clay’s annual Congressional Art competition.

The piece drew outrage, however, from law enforcement groups and fellow lawmakers.

As for whether the painting will stay down, Hunter said: “Lacy can put it back up, I guess, if he wants to … but I’m allowed to take it down.”

Clay’s office has not yet responded to a request from FoxNews.com for comment. And I very much doubt he will. There is no defending something like this. It’s downright evil. More than 27,000 law enforcement professionals had been protesting the display of what they called a “reprehensible, repugnant and repulsive” painting in the hallway of the Capitol.

After being told the piece was removed, Ron Hernandez, president of the Association for Los Angeles Deputy Sheriffs, said in a statement Friday they were “very pleased.” He said: “At a time of our country facing rising crime and a shortage of those willing to work the streets as police officers and deputy sheriffs, we need to make it clear that depictions of law enforcement officers as pigs in our Nation’s Capital is not acceptable.”

My hat’s off to Duncan Hunter. Don’t let the fact that he’s from California fool you… he’s a Marine and a man of honor and courage. He’s the exact opposite of Lacy Clay. I find it extremely odd that Hunter is friends with the likes of Clay. But politics makes strange bedfellows. I go by what you do, more than what you say. Hunter said, “But you’ve got to respect our men in uniform and what they do.” Yes, you do and I’m glad to see someone had the backbone to do just that.