Sheriff Clarke: ‘I’m Tired of One-Percenters like Mark Zuckerberg’ Who Think They Know ‘Who We Are’ [VIDEO]

Mark Zuckerberg is not a friend[1] to the common man. And his staunch resistance to President Trump’s freeze on refugees is just plain hypocritical. Zuckerberg has built a massive wall for security around his estate in Hawaii, blocking everyone’s views and in general pissing people off. Sheriff Clarke is calling him out for his hypocritical stances. Zuckerberg acts like he knows what is best for everyone in America. Being a billionaire doesn’t mean you are above normal Americans and it certainly doesn’t give you the right to tell people what they should and shouldn’t do. He’s a one percenter and he sees things through that lens. Not through a clear perspective of what is good for America. Typical liberal.

If you don’t have borders and laws, you are not a sovereign nation. Sheriff Clarke is exactly right about that. We need that wall to reinstate both the rule of law and sovereignty and we need border agents and possibly the military on that wall to ensure security. Zuckerberg doesn’t have a clue who is coming over that border. It’s not just innocent illegal immigrants and waifs. It’s lethal criminals, terrorists, white slavers and drug dealers. It’s Jihadists who want to kill infidels and I doubt very much if Mr. Zuckerberg would ever want to meet those coming across. 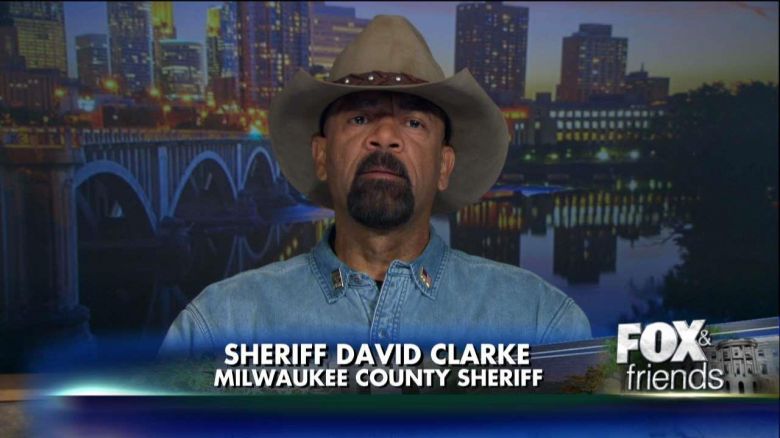 Saturday on Fox News Channel’s “Fox & Friends Weekend,” Milwaukee County, WI Sheriff David Clarke ripped the critics of those that oppose President Donald Trump’s executive order restricting refugees from certain countries from coming to the United States and in particular Facebook founder and CEO Mark Zuckerberg, who he pointed out has his own wall at his home in Hawaii.

“First of all, I’m tired of one-percenters like Mark Zuckerberg and others lecturing us about who we are,” Clarke said. “I know who I am and most Americans know who they are. We are a sovereign nation. If you’re going to be a sovereign nation, you have to have borders and you have to protect those borders. Mark Zuckerberg has no idea of who’s coming into this country and what it takes to vet those individuals. I as a law enforcement officer in my 39th year. We do a lot of vetting of people.”

“I’m tired of all the crocodile tears about the kids — the poor kids coming,” he added. “We’re not talking about that. We’re talking about able bodied grown men, fighting age that should be back in Syria, back in the Middle East, fighting for their country, coming over to the United States to spread jihad.”

Vetting of those coming into our country is very necessary. It’s life and death and I contend that vetting should still go on after they are here. Clarke is well aware of what is involved. He’s been at this for 39 years… longer than Zuckerberg has been alive. We’re talking about invaders here… men with an agenda to conquer our country from within. This isn’t about children or the abused. It never has been.

If you go down on our southern border, you will find out there are ISIS fighters and terrorists that are coming across. They aren’t doing it for asylum or a better life. Their sole goal is to kill us. So before Zuckerberg starts spouting off about something he knows nothing about, I suggest he call Sheriff Clarke and get a crash course in national security. If a wall is good enough for Mark Zuckerberg, it’s good enough for the rest of us.