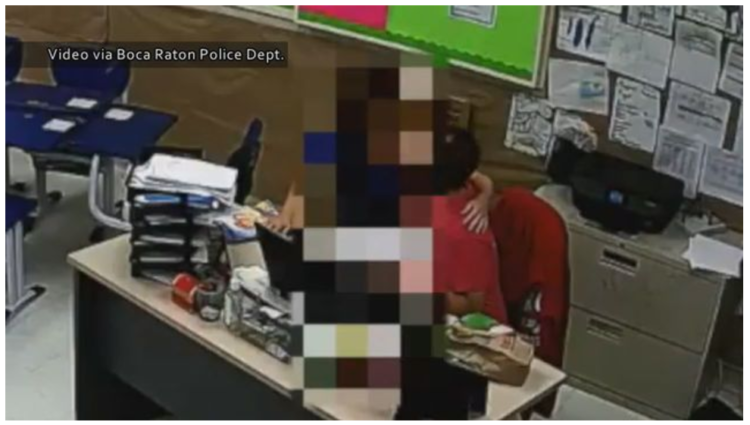 Boca Raton police in Florida have just released surveillance footage showing a local teacher embracing and kissing one of his students on the lips.

As reported by Fox News[2]:

Last week, fourth grade teacher Brian Kornbluth pleaded guilty to a battery charge after being accused of kissing students in his classroom.

According to police, the boy in the video and his sister told officers they went to Kornbluth’s classroom to get gummy bears, and the teacher kissed both of them on the lips.

Brian Kornbluth, 28, has so far denied kissing the young girl mentioned above, but has admitted to kissing the boy. Probably because the video evidence is clear as day. And last week, Kornbluth pleaded guilty to a battery charge in the event shown below that took place in February of this year.

You can watch the short 13-second video below, with the student’s identity pixelated for privacy.

You’re probably wondering how and why this was officially released.

As you could expect, the Boca Raton police released a statement on Facebook[3]. The Chief wrote:

Understandably, many folks have been asking about why we released a video in the “teacher-student kissing case.” The short answer is because the media asked for it and we have to release it.

So, the video didn’t simply “surface.” We didn’t just put it out there to spice up your Tuesday. Some folks in the media thnk it is important for you to see it, so we follow the law to the best of our ability. Please direct your feedback to the appropriate media outlets. Thank you.

Right now, Kornbluth is not currently teaching, but his attorney said that he would like to continue his career as an educator.

Yeah, good luck finding anyone who will ever trust you around children again.